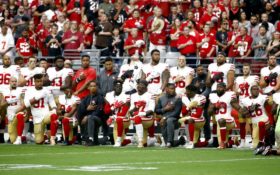 Last week, the NFL offered their Anti-American anthem kneelers a massive payout to stop the protest, which has caused television ratings to plummet.

This week 49ers safety Eric Reid revealed where the money is coming from — and it has conservatives furious.

Yes, that means that NFL players would be stealing cash from veterans — the very people whom they’ve been insulting during the national anthem.

Of course, the NFL has tried to dispute this claim.

But, Reid and other players have decided to walk away from the Players Coalition because they do not agree with how this initiative plans to be funded.

In an interview with Slate, Reid discussed his position on the proposed initiative, “In the discussion that we had, Malcolm conveyed to us — based on discussions that he had with the NFL — that the money would come from funds that are already allocated to breast cancer awareness and Salute to Service,” Reid told Slate.com. “So it would really be no skin off the owners’ backs: They would just move the money from those programs to this one.”

Isn’t it funny how the obnoxiously rich owners are willing to steal money from the pockets of the American heroes they claim to support?

Two other players who have left the coalition, Dolphins safety Michael Thomas and Chargers offensive lineman Russell Okung, have confirmed the report.

ESPN has claimed that owners still have to vote on the proposal in league meetings in March and that funds would come from player and owner contributions.

“[NFL Commissioner] Roger Goodell is trying to make this as easy for the owners to agree to as possible so that — again, their goal is to end the protests,” Reid said. “He’s trying to make it as easy possible to do that for the owners. He’s going to present them with a proposal saying, ‘Look you really don’t have to do anything. We’re just going to shift this money from this area and just move it here.'”

NFL Chief Operating Office Tod Leiweke disputed any claims made by Reid in a statement Friday, “This new program will supplement, and not replace, our other key social responsibility efforts, including Salute to Service, cancer awareness, domestic violence/sexual assault and youth programs.”

Reid made further claims that the NFL has lied to Americans completely in saying that more than 40 NFL players have been involved in Players Coalition talks.

According to Reid, less than half that number are involved, and out of all the players involved, only Eagles safety Malcolm Jenkins has participated in national anthem protests.

Jenkins announced on Thursday that he would stop protesting during the anthem in exchange for the payout.

The NFL’s move has left patriotic Americans only one choice: Swear off the NFL forever!

— Kylie Handler an editor for The Horn News