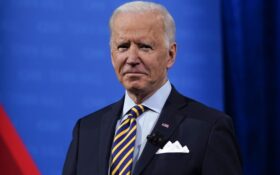 President Joe Biden is getting his first real taste of what it means to be the leader of the free world.

He’s facing a catastrophe at the border, a gas crisis, and a conflict between Palestine-Israel on the brink of all-out war.

Yet and still, his biggest fear is something different entirely.

It’s former President Donald Trump — according to his Chief of Staff Ron Klain.

Klain told Axios that he and his administration are anticipating a face off with Trump in 2024.

Democratic strategist Christy Setzer told The Hill that their clash is all but a sure bet.

“There is every reason to think they’ll face off again,” Setzer said. She also said the Biden administration “needs to gear up for all it entails.”

And she says that while the White House has accomplished some things, Biden will need a lot more than a shiny record to defeat Trump.

“Their record on COVID recovery may be wildly impressive… ” she said, before adding a disclaimer. “… an impressive policy record alone won’t cut it.”

Yet Klain — a close member of the Biden White House — insists that the president will attempt to run up the score on his number of accomplishments to give him an edge come 2024.

“My experience … is that incumbent presidents are judged on their record,” Klain said. “Joe Biden is hopefully assembling a powerful record to run on if he runs for reelection in 2024.”

And the jury is still out on that…

Pundits and experts have given their fair share of opinions on whether or not Biden will make the big dance in 2024.

Here’s one of the latest gaffes:

Joe Biden claims workers aren't being paid to stay home, gets confused, then says the exact opposite pic.twitter.com/hjYln9gu4e

While Biden’s future may be uncertain (he himself even admitted he’s a “great respecter of fate”), it seems that for Trump his future is becoming clearer and clearer.

The former president has been calculated in his public appearances where he has hinted at a strong likelihood of announcing a run.

He reportedly told conservative activist Candace Owens he fully looks forward to an announcement when the time is right.

If so, it’ll be Joe’s worst nightmare come true.