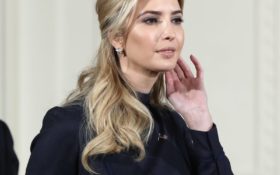 The first daughter of the United States, Ivanka Trump, is successful, popular, and well-loved by the American people.

However, there’s something most voters don’t know about Ivanka.

That’s not actually her name.

Trump’s oldest daughter revealed her real name in a 2010 response to a fan question, when she was asked about her iconic nickname —

My actual name is Ivana. In Czech, Ivanka is the baby name for Ivana, like Bobby is to Robert. RT @Saluxious Ivanka, how'd you get u r name?

“Ivanka is a nickname for Ivana, similar to how a child named Robert could be called Bobby or Daniel could be called Danny. Or you could think of it like the TV show ‘Gilmore Girls,’ in which Lorelai Gilmore names her daughter Lorelai but calls her Rory,” Business Insider reported.

It turns out Ivanka Trump is named Ivana, after the president’s first wife… like Donald Trump, Jr. was named after his father. She was called Ivanka as a child, and the nickname stuck.

Since then, Ivanka Trump has become a household name.

She has become a successful business woman, mother, and fashion icon — and is an esteemed member of the first family.