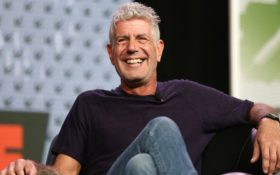 Just weeks before his tragic death, it seems that celebrity chef Anthony Bourdain had complained about being on the receiving end of former Secretary of State Hillary Clinton’s “operatives.”

A celebrated author and television star, Bourdain’s tragic suicide caught his family — and his legion of fans — completely off-guard.

Now, social media users have dug up a disturbing tweet about Bourdain complaining about “being of the receiving end” of “HRC” — Hillary Rodham Clinton — and her “operatives” from just one month ago.

Even though authorities say there is zero evidence of foul play, Bourdain’s public statement and his unexpected suicide just weeks later were quick fodder for far-right conspiracy theorists.

For decades, dark rumors have dogged Hillary Clinton regarding the suspicious amount of deaths and suicide involving her associates.

This week, Bourdain’s death was quickly added to the so-called “body bags” list on far-right websites.

However, Bourdain had recently leveled harsh criticism at Hillary regarding the Weinstein rape trials. According to The Washington Post, Bourdain called her response to the accusations against the top Democratic donor as “shameful” and “disingenuous.”

And in May, he had complained about her “operatives’ wrath.”

..and I am in no way an HRC fan. I’ve been on the receiving end of her operatives’ wrath. And it ain’t fun,

So does that mean Bourdain paid for his criticism of Hillary with his life?

In the end, though, it seems unlikely. Although Hillary’s past is shady enough to raise eyebrows — and while it’s fun to speculate — the facts are pretty straight forward in this case.

There remains no credible evidence that Bourdain’s tragic suicide was connected to Hillary.

Not yet, at least…