Revealed! 89% of media is an attack on Trump - The Horn News 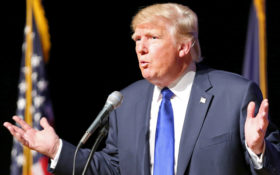 A startling new study found that 89% of all stories in the mainstream media on President Donald Trump is an attack. Even more disturbing, a new poll shows that it’s going to get worse.

That’s because Democrats are clamoring for more leftist propaganda — and news organizations are following the dollars.

It turns out liberals far more interested than Republicans in seeing the news media attack people in power like Trump, a survey released on Wednesday found.

A recent Pew Research Center poll found that nearly 9 out of 10 Democrats judged media criticism of Trump worth it because they think the liberal media keeps political leaders from doing things they shouldn’t.

Only 42 percent of Republicans felt that way.

In other words, Democrats are eating up what the mainstream media is selling — and they’re fighting over their advertising dollars.

While supporters of a party out of power are generally more interested in seeing reporters dig for news than those in power, the gap hasn’t been nearly this wide since Pew began looking at the question in 1985, said Amy Mitchell, Pew’s director of journalism research.

Since then, Democrats have come clamoring back to the liberal media — and the advertising dollars are following.

With Democrats out of power, “they see the media as the last line of defense,” said Tim Graham, director of media analysis at the conservative Media Research Center.

In other words, Democrats are demanding more attacks.

At the same time, many conservatives now see reporters as unfair towards non-liberals, Graham said.

“They don’t see them as journalists,” he said. “They see them as prosecutors in a kangaroo court.”

Pew’s study found interest in national news higher than it was in 2016 – an unusual trend given that people traditionally fade away from the news following election years.

Do you trust the mainstream media?