Cop shocked to hear THIS during last ever radio call (going viral!) - The Horn News 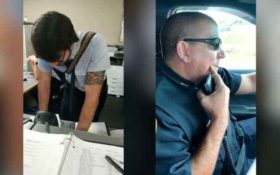 A retiring Massachusetts police officer was in complete shock as he made his final radio call.

Officer Duane Ledoux served with the Southbridge Police Department for over 30 years — and on July 26 he placed his final call, which the department refers to as “final code five.”

The department’s chief wished Ledoux good luck on his future endeavors and thanked him for his service… and then Ledoux was surprised when he heard another familiar voice come over the radio.

Ledoux’s son Nate has flown in across the country to give his father a proper send off.

“It is my sincere pleasure to announce that … after 32-and-a-half years of service, my father, Southbridge Police Officer Duane Ledoux, is retiring and has given his final code five,” Nate said.

“It is my honor to acknowledge this code five, to set free a man who has sacrificed so much of his time for all of us, so that he may spend the rest of his life discovering new craft beer, exploring this beautiful country and, most important of all, chasing glory. Officer Ledoux, badge number 1041, Dad, you are officially code five.”

Ledoux responded to his son, “Love you.”

And while letting the tears flow, he said, “He did come home. He came home.”

This man deserves a round of applause for over 30 years of service with the police department… and for raising a fine young son.

Congratulations to Ledoux on his well-deserved retirement!