Retiree loses 424K check! What happens next will surprise you... - The Horn News 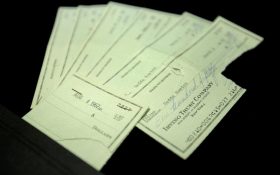 A waiter has returned a cashier’s check worth nearly $424,000 to the retired social worker who lost it.

Armando Markaj found a bank envelope while cleaning off a table last Saturday at Patsy’s restaurant in East Harlem.

Markaj ran outside but the customer was gone. He opened the envelope and got a shock.

After an unsuccessful search, the restaurant’s owner called the Daily News for help.

A “relieved” Karen Vinacour was reunited with her check on Wednesday. It contained proceeds from her apartment sale, earmarked for a down payment on a new home.

Vinacour had not tipped the waiter after her meal. She tried to rectify that but he graciously declined.

Markaj, who’s working his way through school, did accept Vinacour’s apology and gratitude and said he’s “happy for her.”