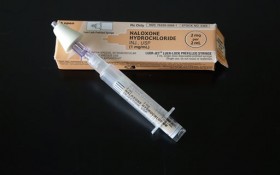 Posing as heroin users seeking help, researchers contacted hundreds of treatment clinics in U.S. states with the highest overdose death rates. The “secret shoppers” were denied appointments much of the time, especially if they said they were insured through Medicaid.

The study revealed other roadblocks: high fees and a government website riddled with wrong phone numbers.

Finding a doctor can be tough for anyone. But for those fighting addiction, motivation can be fleeting. Every day without treatment can lead to a deadly overdose, said co-author Dr. Michael Barnett of the Harvard T.H. Chan School of Public Health.

“Think about the last time you had to make four or five phone calls in a row and how annoying that was,” Barnett said. “Addiction makes doing tasks like that even harder.”

Two researchers made the calls, following a script that cast them as 30-year-old heroin users.

“I found it surprising how many calls I had to make before being offered an appointment,” said graduate student Tamara Beetham who encountered both compassion and scolding from clinic staff. “Whether you have cash in your pocket can determine whether you have access to life-saving treatment.” The study appears Monday in Annals of Internal Medicine .

With nearly 48,000 annual U.S. deaths involving opioids, researchers wanted to understand why more people aren’t treated with buprenorphine, an opioid-based medication available in doctor’s offices that can fend off withdrawal, without a euphoric high.

They rejected a conventional doctor survey.

“The front desk staff are the ones working the schedule every single hour. The best way to get the information that patients would get was to call ourselves,” Barnett said.

They made calls during 2018 to prescribers in Massachusetts, Ohio, Maryland, West Virginia, New Hampshire and the District of Columbia.

They were unable to reach schedulers for 77 of the prescribers after three tries.

If callers said they would pay cash, 38% were told no appointments were available. But 46% were denied appointments when they said they were on Medicaid. The callers canceled any appointments they’d made successfully by the end of each call.

Nurse practitioners and physician assistants did better than doctors in the study, accepting new patients with Medicaid 70% of the time, compared with 40% of doctors with similar patient loads.

Starting buprenorphine treatment costs about $250 and went as high as $500, with some clinics charging extra fees for lab tests.

When appointments were available, the wait was less than two weeks. That suggests doctors have room in their schedules, but are shunning Medicaid because it pays less than other insurance.

Medicaid rules in some states make it harder to treat addiction, requiring counseling or forcing patients to fail other therapies before starting buprenorphine.

“Those barriers should be eliminated,” said Dr. Nora Volkow, director of the National Institute on Drug Abuse, which funded the study.

For now, people who want to get off opioids “have to grit their teeth and have some persistence” to make an appointment, Barnett said. “It takes a ton of patience.”