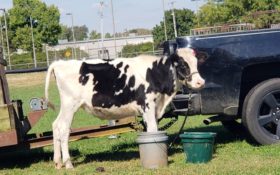 An Ohio man driving home from work Tuesday says he did a double-take before firing up his cellphone to record a cow poking her head out the back window of a pickup truck.

WKEF-TV reports the video posted by Tipp City’s JD Blair on Facebook has gone viral with more than 200,000 shares and nearly 8 million views.

The pickup truck’s driver, Cory Morris, of Ludlow Falls, says 18-month-old Annie has been part of his life since her mother rejected her at birth. He says the 800-pound (363-kilogram) Annie regularly climbs into the back seat of his truck.

GOING VIRAL: Here's something you don't see every day on I-75! This was captured north of Dayton. The cow's name is Annie, and this is how she rolls!READ MORE -> http://bit.ly/2zRUNne

Morris says when people ask about Annie’s road tripping habits, he replies, “Where else would I put her?”