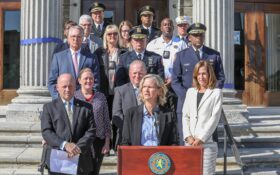 Nassau County, New York, has voted Democrat in every presidential election since 1992. It voted for Joe Biden by 9.42 points, nearly a landslide.

However, the county just elected a Republican as county executive, and it exemplifies a Republican sweep across the suburbs and outer boroughs of true-blue New York City.

Still, Curran waited two weeks for the county to count all the absentee ballots. She waited in vain.

Before entering politics, Curran worked as a reporter for both the conservative New York Post and the non-ideological New York Daily News. She was described as a “centrist Democrat” by both the Daily News and ABC New York… although she ran against a former Republican in the Democratic primary.

The Republicans swept not only suburbs in Nassau County, but also the outer boroughs of New York City.

In Queens, Republican Vickie Paladino will be succeeding Democrat Paul Vallone for the New York City Council’s 19th district, just west of Nassau County. She will become the first Republican to hold this seat since 2014.

In Brooklyn, Republican Inna Vernikov will succeed a retiring Democrat on the city council’s 48th district. She will become the first Republican councilor for Brooklyn since 2002 (and the first for this district since 1999).

What’s more, Vernikov used to consider herself a Democrat. She ran as a Republican this year due to concerns about socialism, she said.

“I’m running as a Republican on principle because I can’t support the Democratic Party, which is no longer the party of John F. Kennedy or Bill Clinton,” Vernikov told Jewish News Syndicate in May.

“Jews coming from the former Soviet Union are very familiar with communism and socialism, and many of us feel strongly that what today’s Democratic Party is promoting is exactly what we ran from—a place where speech was censored, where we were not allowed to practice religion, where we didn’t have freedom or economic opportunity.”

Of course, all these Republicans are serving only municipal positions. These jurisdictions still vote for Democrats at the federal level… and usually even the state level.

Still, to paraphrase a Democrat from the era of John F. Kennedy, all politics is municipal.