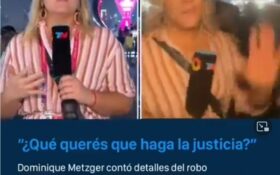 A female reporter from Argentina believes she was robbed while broadcasting live in Qatar for the FIFA World Cup — and she said the police had an unusual response to her robbery report.

Dominique Metzger told TN television that while she was covering the build-up for the first match on Sunday, she believes someone pick-pocketed her handbag and stole her documents, keys, and money.

“I had my small bag on me with all the things that one needs, my wallet, the keys to our hotel room, some napkins,” Metzger told a TN network anchor.

“And you were dancing, right?” the anchor asked her, according to The Daily Mail.

“Yes, I was dancing with the crowd and I’m convinced that it was at that moment when someone opened the bag zipper and took my wallet,” she replied.

“I didn’t realize at that moment, you know you’re live on air, with music and crowds around you, and I was focused on you talking to me too,” Metzger said. “So I wasn’t paying attention.”

“After I finish my live report, I wanted to take my wallet to buy a water bottle and then I realized I didn’t have it,’ she said, according to The Daily Mail.

When Metzger reported the theft to the local police, she said the authorities made an shocking promise — that she could choose the punishment.

“‘Do you want us to sentence him to five years in prison, to be deported?’ He asked me to make the decision,” Metzger said.

“I told them I just want my wallet back, I won’t be making the decision for the justice system,” she reportedly told TN.

A female reporter from Argentina was robbed on the air as she reported live among a crowd of fans celebrating the World Cup in Qatar.#FIFAWorldCup #Qatar2022 #WorldCup #FIFAWorldCup pic.twitter.com/W2hNUOP1me