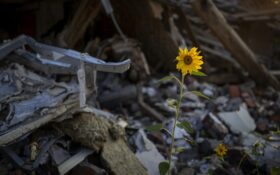 Ukraine claimed to have destroyed bridges and ammunition depots and pounded command posts in a surge of fighting in the Russian-occupied south, fueling speculation Tuesday that its long-awaited counteroffensive to try to turn the tide of war was underway. Russia said it repelled the attack and inflicted heavy casualties.

The clashes took place in the country’s Kherson region, where Moscow’s forces rolled up major gains early in the war. Ukrainian authorities kept the world guessing about their intentions in the latest round of fighting and cautioned against excessive optimism in a conflict that has seen changing fortunes before.

While independent verification of battlefield action has been difficult, Britain’s Defense Ministry said in an intelligence report that several Ukrainian brigades had stepped up their artillery fire in front-line sectors across southern Ukraine.

The port city of Kherson is an important economic hub close to the Black Sea and the first major city to fall to the Russians in the war that began six months ago.

Ukraine’s presidential office reported that “powerful explosions continued during the day and night in the Kherson region. Tough battles are ongoing practically across all” of the area. Ukrainian forces, the office said, destroyed ammunition depots and all large bridges across the Dnieper River that are vital to bring supplies to Russian troops.

The Ukrainian military also reported destroying a pontoon bridge across the Dnieper that the Russian forces were setting up and hitting a dozen command posts in the region with artillery fire.

Amid the talk of a major counteroffensive, Ukrainian President Volodymyr Zelenskyy said in his nightly video address on Monday that one “won’t hear specifics from any truly responsible person” about Kyiv’s intentions, “because this is war.”

The British defense ministry said that the most of Russia’s units around Kherson “are likely under-manned and are reliant upon fragile supply lines” while its forces there are undergoing a significant reorganization.

Russian Defense Ministry spokesman Lt. Gen. Igor Konashenkov maintained that its forces stood up well and that Ukraine lost hundreds of troops, tanks and other armored vehicles in Monday’s action. His claim could not be independently verified.

Ukrainian independent military analyst Oleh Zhdanov told The Associated Press that “it will be possible to talk about the effectiveness of Ukrainian actions only after large cities are retaken.” He added that Ukrainian forces had breached the first and the second lines of defense in the Kherson region several times in the past, “but it didn’t bring about results.”

“The most important thing is Ukrainian artillery’s work on the bridges, which the Russian military can no longer use,” Zhdanov said.

The war has ground to a stalemate over the past months with casualties rising and the local population bearing the brunt of the suffering during relentless shelling in the east and the south.

Amid fears that the fighting around the Russian-occupied Zaporizhzhia nuclear power plant could lead to a catastrophe, a team of experts from the U.N. atomic energy agency sent out on a mission to visit and safeguard the complex. Ukraine and Russia have accused each other of shelling the area over and over.

Nikopol, a city just across the Dnieper from the plant, again came under a barrage of heavy shelling, local authorities said, with a bus station, stores and a children’s library damaged. And the city of Zaporizhzhia, about 50 kilometers (30 miles) from the plant, was targeted by a Russian missile strike, Ukraine said.