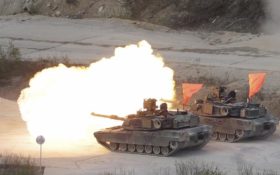 President Donald Trump and his top advisors are preparing a number of “strategic” responses to North Korea’s reckless nuclear build-up. Near the top of the pile, according to former General H.R. McMaster, is a full-blown military attack.

According to McMaster, continuing the same approach as former President Barack Obama would be “insanity” — and Trump is preparing for much tougher action.

“The threat is much more immediate now and so it’s clear that we can’t repeat the same approach … the failed approach of the past,” H.R. McMaster, a national security adviser, said during a conference with Homeland Security Chief John Kelly.

“What we have to do is prepare all options because the President has made clear to us that he will not accept a nuclear power in North Korea and a threat that can target the United States and target the American population,” McMaster said.

The statement was made just hours after North Korea’s U.N. ambassador announced his country’s dictator, Kim Jong Un, would never stop building up his nuclear arsenal — regardless of economic sanctions, international pressure, or even military attack.

“Together we will achieve the dismantlement of North Korea’s nuclear program, peace on the Korean Peninsula, and eventually peace in Northeast Asia,” Moon said.

The United States currently has 28,000 troops stationed in South Korea, and has recently begun deploying a new missile defense system — THAAD — as a counter to Kim Jong Un’s dangerous build-up.

Trump had previously asked China to put economic pressure on their wayward ally, but has reportedly grown frustrated by the lack of results.

“The takeaway is China is still not doing what China needs to be doing, and while we’re working with them in a very cooperative way right now, my sense is if they don’t step up soon we’re going to then move to the coercive mode, which means secondary sanctions,” Senate Foreign Relations Committee Chairman Bob Corker told the press.