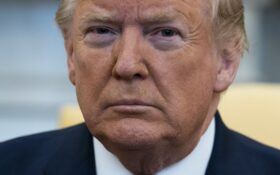 If former President Donald Trump runs for the White House again in 2024, then he’ll need a running mate.

One reporter has some ideas as to who might make the cut.

Maggie Haberman, a reporter for The New York Times, gained close access to Trump during his time in the White House… and she went on The View Monday to discuss Trump’s ideal running mate.

“Privately he has been attacking Ron DeSantis,” Haberman said. “His weight, how he sounds that he’s phony, that’s a big one of Donald Trump’s about a number of people. He is really focused on Ron DeSantis in a way that he isn’t on almost anybody else.”

Co-host Ana Navarro interjected after that.

“Obviously, it’s not going to be Mike Pence,” Navarro said, referring to the former vice president’s recent critiques of Trump. “So who do you think he would look at as a possible running mate?”

“There’s a couple people whose names get mentioned,” Haberman said. “The one that actually gets mentioned the most by people close to him is Tim Scott, from South Carolina, the senator… and then Sarah Huckabee Sanders, who is possibly the next governor of Arkansas.”

Sarah Huckabee Sanders served as White House press secretary under Trump. She is the daughter of former Arkansas Gov. Mike Huckabee, and she’s currently running for that office herself.

According to one aide’s remarks to CNN, Trump believes that he could benefit from a female running mate.

After the interview, Haberman faced criticism for cashing in on her access to Trump. She went on The View to promote her new book Confidence Man, a lengthy profile of Trump.