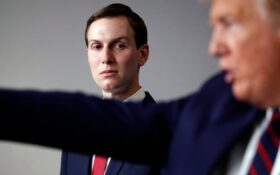 Now, Kushner reportedly wants to stay away from the White House for the foreseeable future, even in the event of a second Trump presidency.

And the feeling appears to be mutual.

Trump doesn’t want Kushner back, according to a bombshell interview with a former Trump staffer.

Peter Navarro, the former president’s onetime trade advisor, told Newsweek, “Kushner’s not gonna get anywhere near the White House on a formal basis. Not gonna happen.”

“He’s talked himself out of that with his post-first term dealings with foreign entities who are giving a bunch of money for his hedge fund,” Navarro continued.

Kushner reportedly tried returning to New York’s high society after Trump’s exit from the White House… only to receive the cold shoulder from New York’s elite.

In other words, Kusher is reportedly facing exclusion from both New York and D.C.

Since leaving the White House, Kushner founded a private equity firm with Saudi Arabia’s current administration as an investor.

Navarro made the comment to Newsweek while promoting his upcoming book, Taking Back Trump’s America: Why We Lost the White House and How We’ll Win It Back.

He didn’t hold back in the interview.

“Jared Kushner, the young son-in-law who had no business being there to begin with, made many mistakes across a wide range of issues, whether it was China, the pandemic or ultimately running the worst campaign in presidential history,” Navarro said.

According to a copy of the book obtained by Newsweek, Navarro said that Trump tried to remove Kushner from the 2020 campaign and replace him with former Chief Strategist Steve Bannon.

“And that was that. And the rest is a catastrophic strategic failure,” Navarro wrote, according to Newsweek.

Trump has yet to confirm the claim that he tried to remove Kushner from the campaign.

“Somebody wants to dispute the claim, go ahead. But nobody’s disputed it,” Navarro told Newsweek. “I was there when it happened.”

In other words, Navarro is selling his own eyewitness testimony for $24.99 per book.

Kusher served in the White House during Navarro’s tenure as trade adviser. He helped to broker Trump’s U.S.-Mexico-Canada Agreement, also known as the USMCA trade deal.

Trump has been dropping hints about running for president in 2024, although some observers doubt his capacity to win.

Navarro remains undecided about whether to work for Trump again. Instead, he is focusing on more urgent concerns, like the midterm elections.

“The mission is taking back the House from Nancy Pelosi and her merry band of partisan constitutionalists,” he told Newsweek.