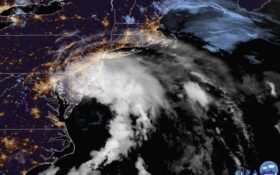 The storm system was expected to bring 2 to 4 inches (5 to 10 centimeters) of rain, with the possibility of flash flooding in parts of the mid-Atlantic and southern New England, The U.S. National Hurricane Center said in its 11 a.m. advisory. That’s down from earlier forecasts of about 3 to 5 inches (8 to 13 centimeters) of rain.

Several beaches in Delaware had been temporarily closed because of the storm. And police in Ocean City asked drivers to avoid southern parts of the tourist town because flooding had already made some roads impassable.

A tropical storm warning remained in effect from Fenwick Island, Delaware, to Watch Hill, Rhode Island. The warning area includes Long Island and the Long Island Sound in New York, forecasters said. The center of the storm remained off the mid-Atlantic Coast on Friday morning.

“We expect some pretty heavy winds, and we need people to be ready for that, and some flash flooding in certain parts of the city,” New York City Mayor Bill de Blasio said at a briefing Friday morning.

The summer storm’s impact on the city was expected to be ”pretty limited,” but de Blasio said it would be a bad night for outdoor dining — the only sit-down service allowed at city restaurants because of the pandemic.

“If you were going to go out tonight, instead order in and keep helping our restaurant community,” he said.

President Donald Trump said the storm is being monitored and that the Federal Emergency Management Agency was poised to help if needed.

Fay is the earliest sixth-named storm on record, according to Colorado State University hurricane researcher Phil Klotzbach. The previous record was Franklin on July 22, 2005, Klotzbach tweeted.

Two named storms formed before the official June 1 start of the hurricane season. None of this season’s previous five named storms strengthened into hurricanes.