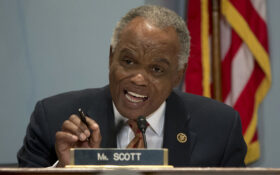 It’s the question GOP rival candidate Casear Gonzales wants answered after the 82-year-old Scott has completely vanished from the 2022 election campaign trail, and hasn’t been seen in over a month.

Gonzales’ campaign has speculated that Scott’s health is failing — and he’s trying to hide it from voters just days ahead of the 2022 midterm election.

“He’s been missing. The last time anybody has seen him was in September in Congress … [and] he’s not been campaigning,” Gonzales reportedly told Breitbart News.

Scott’s health has been questioned since the elderly Georgia Democrat had a serious injury last year, and Gonzales said the last “appearances that [Scott] made were very tightly managed.”

“You could not go in there unless you were invited,” he said. “Only certain members of the press were allowed, and only certain people could take pictures.”

“He’s very feeble and he’s been in declining health, and in that condition, you don’t want your constituents to see you,” Gonzales reportedly told Breitbart.

“Nobody has been able to find David Scott,” Rheinhold said on his show this week.

Rumors have swirled that “either David Scott had passed away, or that he was in hospice,” the radio host claimed.

Listen to this clip from Atlanta's 106.3 Xtra regarding US Rep. David Scott (GA-13) being MIA. Feel free to share.

Scott is expected to win re-election easily in the deep blue Georgia county, despite health concerns.