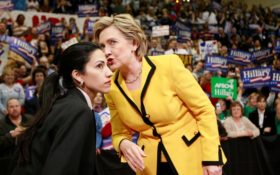 Pedophile Anthony Weiner’s wife Huma Abedin allegedly wept over the shoulder of failed presidential candidate Hillary Clinton when she got word that the FBI reopened the Clinton email probe over messages that were found on Weiner’s laptop.

In a new book written by the Clinton campaign’s Communications Director Jennifer Palmieri titled “Dear Madam President: An Open Letter to the Women Who Will Run The World,” Palmieri exposes the biggest scandals that ever happened throughout the campaign.

“He’s going to kill me,” Abedin allegedly cried of Weiner, who was in trouble with the FBI over texting inappropriate photos to a minor.

According to the Daily Mail, “Palmieri recalls having to tell Clinton that Comey had sent a letter to Congress detailing that he had found new emails pertinent to the FBI’s investigation into her secret server, and would be looking into those as well.”

Comey sent the letter just 11 days prior to Hillary losing the 2016 election.

“I have something to tell you,” Palmieri recalled saying to Clinton, as the campaign plane was flying to Iowa.

After giving Hillary the news, Palmieri explains that the former Secretary of State had “the slightest wry smile on her face.”

Palmieri asked, “You know we weren’t done, didn’t you?”

“Yes, I knew we weren’t done,” Clinton responded, adding, “Let’s talk about what we are going to do about it.”

Later in the day it was revealed that the new emails discovered were taken from a laptop used by Abedin, although it belonged to Weiner. Former FBI Director James Comey had seized that laptop from the former Democratic congressman as part of his sexting probe.

“It was wrenching to watch the pain this news caused Huma. She was distraught,’ Palmieri described. “This was a rare moment when she broke down. I watched as Hillary hugged her and was able to calm Huma down.”

Palmieri recalled Hillary offered to get all the aides ice cream sundaes in an effort to cheer up Abedin.

“[Hillary] never said a word of complaint over the course of the next 11 days about the impact the Comey letter was having on her personally,” Palmieri said.