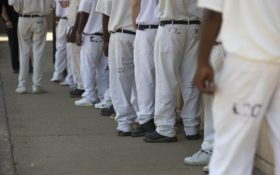 More specifically – and more alarmingly for anyone who’s ever received a political phone call – his campaign used inmates to dial voters and try to sell them on the former New York mayor, according to an explosive report in The Intercept.

The website said Bloomberg’s campaign used a third-party vendor that hired a company that runs multiple call centers including two in Oklahoma based in prisons.

Inmates in at least one of those two prisons – the Dr. Eddie Warrior Correctional Center, a minimum-security women’s prison – made calls on behalf of Bloomberg to voters in California.

The website said the company paid the state’s minimum wage of $7.25 an hour for the calls.

However, much of that cash went to the state rather than the inmates, who earned just $1.45 an hour.

“We believe this type of work helps prepare inmates for release,” a spokesperson for the Oklahoma Department of Corrections told CBS News, adding that inmates work off scripts to conduct surveys, sell subscriptions and make campaign calls.

The Intercept said the inmates disclosed that the calls were paid for by the Bloomberg campaign, but didn’t say they were in prison.

“I’m not attacking the news,” he said in a statement. “The story was fundamentally accurate.”

However, he said the campaign wasn’t aware of the use of prison labor until they were asked about it by a reporter.

“We immediately ended our relationship with the company and the people who hired them,” he said. “We do not support this practice and we are making sure our vendors more properly vet their subcontractors moving forward.”

Campaign veterans say it’s possible neither Bloomberg nor his campaign knew they were hiring prison workers.

“In any campaign there are a whole host of services that you contract out,” political consultant Brian Brokaw told The New York Times. “So to a certain extent you have to be reliant on your point of contact — to the person that you were working with directly.”

However, critics contend that it doesn’t absolve Bloomberg and others like him.

“[T]hat’s like saying department stores making clothes in southeast Asia don’t know that 5-year-olds are stitching together their soccer balls,” Prison Legal News editor Alex Friedmann, an advocate for incarcerated people, told The Intercept. “Well, shouldn’t you know? Shouldn’t you have some idea of your supply stream, or what your downside supply stream is doing?”

Friedmann called the use of prison labor “exploitation” of the incarcerated given that they have “virtually no other opportunities” to earn cash.

Bloomberg was attacked from both side of the aisle.

If Trump did this the media would lead with it for a week and claim he’s disqualified because of it.

What’s the bet this story disappears by tomorrow and is never heard about again?https://t.co/EMyPDNQPws

A top aide to campaign rival Sen. Bernie Sanders, I-Vt., compared it to dystopian science fiction, telling The New York Post it should be written into the plot of “Black Mirror,” a modern TV show with echoes of “The Twilight Zone.”

Julián Castro, former housing secretary under President Barack Obama, used the news to call attention to his own positions shortly before dropping out of the race.

Bloomberg has already spent $155 million on campaign ads, making him far and away the biggest spender among Democratic candidates despite his late entry into the race.

That figure includes TV and digital ads – and not other expenses such as phone calls from prison inmates.