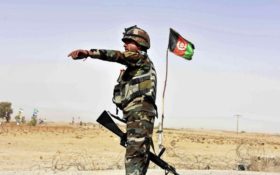 The Taliban is rapidly advancing through Afghanistan as U.S. forces withdraw – and seizing freshly abandoned American military equipment in a matter of hours.

They’ve been showing it off on TV and on social media, with footage from Sky News showing “Property of USA Government” labels on boxes full of grenades, mortars and bullets as well as other strategic items such as satellite phones.

The Taliban is already turning that equipment against the Afghan government that the United States has tried – and failed – to prop up.

The New York Times reports that Afghans are “terrified and exhausted” as the Taliban swiftly advances – with several regional capitals already under assault.

In the past, local forces might count on U.S. air support to step in and save them from the hardliners.

“All districts are under their control,” Badghis provincial council member Zia Gul Habibi told AFP of her province. “People are really in fear.”

Reuters has reported smoke and fighting in the Badghis capital city, Qala-e-Naw, where Taliban fighters have entered the city and in some areas local security forces have already surrendered.

In one instance, the Taliban busted open a prison and allowed all of the inmates out.

The Taliban’s repressive 1990s regime was known for its brutality, militancy and unwillingness to abide by international norms.

They also turned the nation into a safe haven for radical Islamic terrorists including Osama bin Laden and his al Qaeda terror network.

They hatched the 9/11 terror plot while in Afghanistan.

The U.S. military forced the Taliban out of power, but the organization quickly turned into a guerrilla insurgency – much as they were when they found the Soviets in the 1980s.

The Times notes that as the Taliban advances, they’re trying to show the world they’ve reformed. They’re ready to lead and provide essential services to people who desperately need them.

But the situation on the ground tells a much different story.

“But the signs that the Taliban have not reformed are increasingly clear: An assassination campaign against government workers, civil society leaders and security forces continues on pace. There is little effort to proceed with peace talks with the Afghan government, despite commitments made to the United States. And in areas the insurgents have seized, women are being forced out of public-facing roles, and girls out of schools, undoing many of the gains from the past 20 years of Western presence.”

But many observers are skeptical.

“In terms of capability, weapons and men, I believe it is strong enough,” Ashraf Afzal, assistant professor of politics at University of Nottingham, told FRANCE 24. “But the will to defend it is a different thing. The reports that I am getting from people on the ground is that the national army is melting away in the face of the Taliban.”

He believes the Taliban might soon take Bagram Air Base, a key strategic target as well as a symbolic one given that it has been home to both the U.S. military in recent years and to the Soviets back in the 1980s when they tried – and failed – to keep order in Afghanistan.

Today, Afghanistan is one of the few policy areas where President Joe Biden, who ordered the current withdrawal, agrees with his predecessor. Late last year, then-President Donald Trump promised a complete withdrawal by May.

In April, when Biden announced his own plans to pull out, Trump issued a rare statement of praise.

“Getting out of Afghanistan is a wonderful and positive thing to do,” he said at the time. “Nineteen years is enough, in fact, far too much and way too long.”