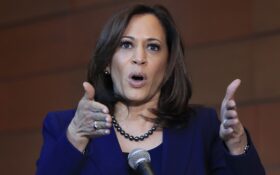 Wednesday afternoon the U.S. Secret Service arrested a man who was reportedly found with an “AR-15 semi-automatic rifle, 113 rounds of unregistered ammunition, and five 30 round magazines.”

The man was just outside the residence of Vice President Kamala Harris.

Reports of the arrest went viral after a former Capitol Hill staffer witnessed secret agents speaking with a Texas man who had been wanted by police.

“A bunch of cops passed me at the National Cathedral,” he added. “What was really odd was it was marked units and unmarked units.”

In the video, Leyden also cited a crime sleuth on Twitter known for monitoring the activity of police in Washington, D.C., who had claimed the man was “wanted with possible threatening statements against the Vice President.”

According to a CNBC report, 31-year-old Paul Murray admitted to the secret service that he had a car parked several miles away that contained more ammo.

The report also mentioned that Murray was a veteran. The U.S. Army had confirmed that he had been a drone pilot from 2010 to 2014.

Authorities have since charged Murray with a handful of offenses, including “carrying a dangerous weapon” and “carrying a rifle or shotgun outside of a business.”

As for Harris, although her residence is located in the Naval Observatory nearby, it is undergoing renovations — she and husband Douglas Emhoff are currently staying at the Blair House, closer to the White House.