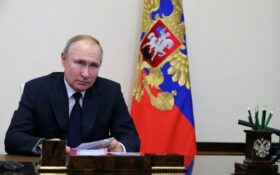 Estonia’s foreign intelligence agency said Wednesday that Russia is counting on the COVID-19 pandemic to weaken unity in the West which would help Moscow gain a more prominent role in international affairs and lead to “declining Western influence on the global stage.”

The Kremlin thinks the pandemic will force Western nations to focus on domestic policy and economic problems and facilitate the emergence of populist and extremist movements, the Estonian Foreign Intelligence Service said in its annual report.

“For its part, Russia is prepared to add fuel to the flames to encourage these trends,” the report states. “Therefore, 2021 will again see Russian influence operations designed to create and deepen divides within and between Western societies, including at the EU (European Union) level.”

The authors of the 79-page document said Russia’s strategy would likely include attempts to discredit COVID-19 vaccines developed in Western countries, especially the one made by British-Swedish company AstraZeneca. Russian propaganda has labeled the vaccine AstraZeneca developed with Oxford University in England as a “monkey vaccine.”

“With these smear campaigns, Russia hopes, on the one hand, to create a more favorable position for its own vaccines on the world market and on the other hand, to promote its strategic ambition to show itself as being the first among the major powers to provide a solution to the COVID-19 crisis,” the report said.

The Russian government did not offer an immediate reaction to the intelligence report from Estonia, a former Soviet republic. Moscow has repeatedly denied similar Western claims of malign intentions in the past. It also has accused the West of trying to discredit the Russia-produced COVID-19 vaccine, Sputnik V.

Russia is actively promoting Sputnik V in several European nations, including Serbia. Hungary was the first and so far only European Union nation to have purchase quantities of Sputnik V.

“The coronavirus epidemic hasn’t diminished the actions and ambitions of (Russian President Vladimir) Putin’s regime. On the contrary, we can see how there is an attempt to utilize the pandemic to reap gains for (Russia’s) domestic and foreign policy,” the Estonian agency’s Director General Mikk Marran told reporters during a news conference in Tallinn, the nation’s capital.

Estonia’s relations with neighboring Russia have remained chilly ever since 1991, when the Baltic nation of 1.3 million and its neighbors Latvia and Lithuania regained their independence amid the fall of the Soviet Union. The three countries have since joined NATO and the European Union.

Though focusing largely on events in Russia or in neighboring nations such as Belarus and Ukraine, the report also discussed developments in China. It said Beijing’s ambitious plan to become the global leader in technology “poses major security threats” to the rest of the world.

New generation 5G mobile networks, advanced satellite navigation technology, cloud services and artificial intelligence were listed in the report as examples of where China either has or hopes to play a key global role.

China’s “leadership has a clear objective of making the world dependent on Chinese technology,” the document states.