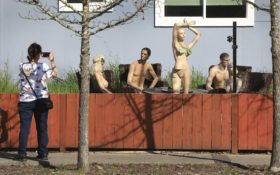 A Colorado city has settled a lawsuit with a man who criticized a gubernatorial candidate using a sign featuring mannequin buttocks clothed in lingerie.

The Reporter-Herald reports that insurers for Loveland have settled the First Amendment lawsuit filed by Bob Cluster for $70,000.

The city about 51 miles (82 kilometers) north of Denver admits no wrongdoing in the April 15 settlement, and its attorney says no police policy changes or training are required.

Loveland police detained the 80-year-old resident in June for holding the sign that Cluster said was intended to satirize the political motives of candidate Jared Polis.

One side of Cluster’s sign said Polis “will be breaking old taboos & barriers” while the other side displayed the mannequin body part and a Polis slogan regarding “bold vision.”