Commuters and consumers relieved at railway news - The Horn News 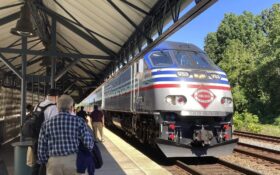 September was shaping up as a good month for commuters on Virginia Railway Express outside the nation’s capital, with the service offering 30 days of free rides to lure back riders lost during the pandemic.

Then a freight-rail strike threatened to shut down service on the VRE entirely, along with numerous other commuter rail services across the country, though President Joe Biden said early Thursday that a tentative agreement had been reached to avert it.

“I really do not want to have to drive to Crystal City,” said Chris Barbagallo of Bristow, Virginia, as he waited Wednesday afternoon for the train back home.

He takes the roughly hourlong train ride from the outer suburbs of Prince William County to avoid the region’s notorious traffic. VRE said it would have been forced to shut down service if there was a strike, and there are few feasible mass-transit alternatives for long-distance commuters.

Some commuter lines would have been affected; others would not. It depends largely on whether the commuter line owns its own tracks or uses tracks owned by the freight companies.

The largest commuter rail systems, all in metropolitan New York, would not have been affected, but the Metra system in Chicago said before the deal was announced that it was expecting disruptions on at least four of its 11 lines.

Commuter rail services in the Los Angeles and San Francisco Bay areas would have also been affected by a strike. The Sounder system in the Seattle area would have been forced to shutter. About 5,000 people ride Sounder trains each day — down from about 20,000 before the pandemic. In greater Minneapolis, transit agencies planned to offer bus service to replace commuter rail service that would be forced to suspend on the smaller Northstar service

The Association of American Railroads, which represents the freight rail industry, estimated that half the commuter rail systems in the country depend at least in part on tracks owned by the affected freight railroads.

John Cline, director of government relations for the Commuter Rail Coalition, an industry trade group, said there are 36 commuter rail lines in the U.S., and the impact on each ranges from “potentially catastrophic” to negligible.

Meanwhile, there was little the commuter systems could do but wait to see how it played out.

“We’re kind of like innocent bystanders,” he said. “We don’t have a seat at the table. We’re not negotiating these contracts.”

At Virginia Railway Express, the potential strike comes as the service is offering free rides during the month of September in an effort to boost ridership that has never recovered from the pandemic. It also comes at a time when riders are utilizing VRE as a substitute for six stations in northern Virginia that are temporarily closed on the larger Metrorail system.

On the other side of the Potomac, the Maryland Transit Administration notified users of the MARC commuter rail service that service would be suspended on its Brunswick and Camden lines if there was a strike, but service on the Penn line could continue.

At the Crystal City station on the VRE, commuter Thomas Good of Woodbridge said he’s been enjoying the free rides during September on a service that runs toward the pricey side — a one-day pass costs nearly $25 on the longest rides. He’s not looking forward to driving but is prepared to adapt.

“Flexibility has been the word” in recent years, he said. “I think we can figure it out.”