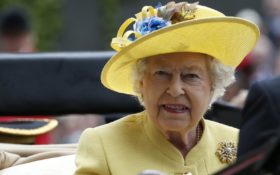 The palace said in a statement that the 92-year-old monarch was set to attend a church service to mark the bicentenary of an order of chivalry but “is feeling under the weather” and will not attend. The service marks the 200th anniversary of the Order of St. Michael and St. George.

“The Queen is feeling under the weather today and has decided not to attend this morning’s service at St. Paul’s Cathedral marking the 200th anniversary of the Order of St. Michael and St. George,” the palace said in a statement. “Her Majesty will be represented by [her cousin] The Duke of Kent as Grand Master of the Order.”

The royals have suggested that this is no cause for alarm as the doctor has not been called. The Queen is still scheduled to visit Windsor Castle later on Thursday.

The Queen has had a busy schedule in recent weeks, including appearances at the Royal Ascot horse show. Just two nights ago, the Queen was in good spirits as she attended an event celebrating young leaders at a Buckingham Palace party with her grandson Prince Harry, and his wife Meghan Markle.