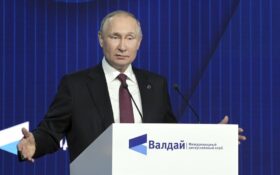 Russian dictator Vladimir Putin’s humiliating defeat outside of Kyiv earlier this year was just the beginning of the bad news.

Putin’s bloody and unprovoked invasion of Ukraine has stalled, and in the south of the country his battered army is digging in and hoping to stop a looming Ukrainian counterattack.

At home, things aren’t any better. According to a report by The Sun, Putin is battling both cancer and Parkinson’s syndrome.

His health has been “sharply deteriorating” and he’s on a steady diet of steroids. Recently, Putin’s hands have begun to turn black, a Russian intelligence source reportedly told the British tabloid.

“I can confirm he has been diagnosed with early stage Parkinson’s disease, but it’s already progressing,” the intelligence officer reportedly said.

“This fact will be denied in every possible way and hidden,” The Sun reported.

“Putin is regularly stuffed with all kinds of heavy steroids and innovative painkilling injections to stop the spread of pancreatic cancer he was recently diagnosed with,” their source reportedly said.

“It not only causes a lot of pain, Putin has a state of puffiness of the face and other side effects — including memory lapses,” he claimed.

Videos released by 🇷🇺 Government news show what could be track marks, from IVs, on the hand of Putin.

For the same event, the Kremlin released two videos: One with tons of watermarks (making the hand harder to see), the other without any shot of his hand. pic.twitter.com/a1mfs6hOud

There was no mention of the health issues when the Russian dictator praised Turkey on Wednesday for their mediation efforts to get the abandoned grain shipment deal back on track, allowing Ukrainian grain to reach the world as winter nears.

Putin thanked Turkish President Recep Tayyip Erdogan’s “neutrality in the conflict as a whole” and his efforts at “ensuring the interest of the poorest countries.”

Putin was reportedly confronted by Erdogan during those talks and urged to “completely withdrawal” from Ukraine because “defeat is inevitable.”

Turkey is emerging as the dominant player in this grain deal.

After convincing Moscow to participate once again, Erdogan reportedly suggested to Putin to “completely withdraw & start negotiations” with Kyiv – as “defeat is inevitable”

Erdogan said the renewed deal would again come on stream Wednesday, prioritizing shipments to African nations, including Somalia, Djibouti, and Sudan. That’s in line with Russia’s concerns that most of the exported grain had ended up in richer nations since Moscow and Kyiv made separate agreements with Turkey and the U.N. in July.

U.N. humanitarian chief Martin Griffiths said Monday that 23% of the total cargo exported from Ukraine under the grain deal went to lower or lower-middle income countries, which also received 49% of all wheat shipments.

Ukraine and Russia are key global exporters of wheat, barley, sunflower oil and other food to developing countries where many are already struggling with hunger. A loss of those supplies before the grain deal pushed up global food prices and helped throw tens of millions into poverty, along with soaring energy costs.

The July grain agreement brought down global food prices about 15% from their peak in March, according to the U.N. After the announcement of Russia rejoining the deal, wheat futures prices erased increases seen Monday, dropping more than 6% in Chicago.

Meanwhile in Ukraine, thousands of homes in the Kyiv region and elsewhere remained without power, officials said Wednesday, as Russian drone and artillery strikes continued to target the country’s energy infrastructure.

Although power and water were restored to the city of Kyiv, Kuleba didn’t rule out electricity shortages lasting “weeks” if Russian forces continue to hit energy facilities there. In a Telegram post, he accused Russian forces of trying to prompt a serious humanitarian crisis.

The two cities are located across the Dniper River from the Zaporizhzhia Nuclear Power Plant, Europe’s largest nuclear facility. Russia and Ukraine have for months traded blame for shelling at and around the plant that the U.N.’s nuclear watchdog warned could cause a radiation emergency.

In a development easing such fears, Ukraine’s state nuclear company Energoatom said the Zaporizhzhia plant has been reconnected to the country’s power grid after Russian shelling forced the facility to rely on generators to cool its spent nuclear fuel.

Continued Russian shelling in southern and eastern Ukraine caused at least four civilian deaths and wounded 17 others between Tuesday and Wednesday, according to the office of Ukrainian President Volodymyr Zelenskyy.

Russian fire damaged a hospital and apartment buildings in the Donetsk region city of Toretsk. Donetsk Gov. Pavlo Kyrylenko said Wednesday Ukrainian and Russian forces continued to fight for control of the cities of Avdiivka and Bakhmut, both key targets of a Russian offensive in the region.

In southern Ukraine, Russian-installed authorities in the occupied Kherson region relocated civilians further into Russian-held territory in anticipation of a major Ukrainian counterattack to recapture the provincial capital of the same name.

The retreating Russian forces have dug trenches to prepare for the expected ground assault.