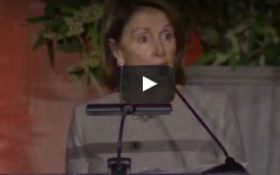 Is something wrong with California Rep. Nancy Pelosi’s mental health? Concern has grown in recent months — and a shocking video released Thursday has added fuel to critic’s speculation that Pelosi isn’t all there.

Either Pelosi was woefully unprepared for her short remarks… or she suffered some kind of mental health episode on stage.

Pelosi stumbled when she says the honoree’s “rec — recognition” was well deserved, said their “strong moral vairce — voice” was inspiring, and that America should open the door to “children freeing — fleeing atrocities.”

That’s not all. She stumbled over a number of country names, misidentifying Sudan as “Sudon” and Yemen as “Yuma –Yamen.”

The errors keep going until it’s a little hard to watch.

“Just over 7 minutes after she started, Pelosi thanked the group for the invitation, stood and stared awkwardly, then made her way off the stage,” The American Mirror reported.

This isn’t the first time Pelosi’s mental health has been called into question.

In early February, Pelosi also bumbled her way through an embarrassing, error-riddled speech that was so unsettling, The Federalist Papers reporter Robert Gehl said her behavior reminded him of his father-in-law’s early-onset Parkinsons symptoms.

Critics have begun openly wondering: Is it time for Pelosi to resign?

One thing is certain.

Just the speculation that our country’s elected lawmakers may be working until their mentally unprepared has reinforced the need for Congressional term limits.