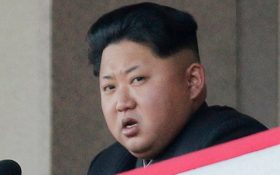 A video has been circulating throughout the North Korea’s leadership that has critics saying North Korean dictator Kim Jong Un is ready to cave into President Donald Trump’s negotiations.

According to Japan’s Asahi Shimbun, one of the country’s top newspapers, there is video footage showing a side of the dictator many have never witnessed — Little Rocket Man openly weeping over the current economic crash of his country because of Trump’s tough sanctions.

A defector to South Korea reports that the video serves as a documentary to educate party officials and was intended to show Kim incredibly upset over his inability to overhaul the country’s economy.

The footage, which surfaced in April, may have been used as a propaganda to convince subordinates to work harder. Others are predicting that is it a warning to show officials the country may look different after the summit with Trump.

The Asahi Shimbun reports, “the defector said the video was also probably intended to drive home the point that “party officials had no choice but to obey Kim Jong Un” as North Korea dangles the prospect of abandoning its military provocations in return for extensive economic assistance and safeguards for its security.”

Kim, who is seen as a god-like figure in his country, is meant to be all powerful. Footage of him crying would come as an extreme shock to officials in the country.

The footage reportedly shows Kim standing along a coastline gazing out as tears trickle down his cheek.

“Seen in this light, the video may be an attempt to downplay any sense of alarm triggered by a sudden shift in policy,” Asahi Shimbun reports.

It is no secret that North Korea is desperate for the summit to occur. The country’s economy is clearly hurting from the sanctions imposed by Trump.

North Korea gave a very sharp 180-degree turnout after Trump’s surprise cancellation of the June summit, scrambling back to the bargaining table.

The video footage which shows a different side of the dictator may show an attempt to portray Kim in a more flattering light to convince other country’s officials that North Korea is ready to open up to dramatic change to its foreign policy.

Asahi Sumbin states, “The video may be intended to prepare the nation for the day that will mark a sea change in the country’s fundamental outlook and way of dealing with the rest of the world.”