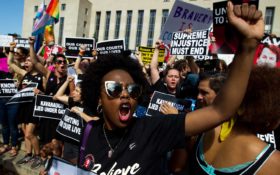 The mainstream media and Democrats have hoped that the confirmation of Supreme Court Justice Brett Kavanaugh would light a fire underneath Democratic voters heading into the critical midterm elections in November.

However, the drama surrounding the Kavanaugh confirmation has done the exact opposite. According to a new poll released Monday, Democrats may have been more likely than Republicans to vote back in July… but not anymore.

The data  suggests that conservative women have been “awakened” and are fired up to get out and vote — while Democratic women have displayed less enthusiasm for the midterms this week compared to July.

After Dr. Christine Blasey Ford accused Kavanaugh of sexual misconduct, the media was eager to tell readers how American women would react to the accusations. Many believed that angry liberal women would head to the polls to vote against Republicans. But that’s not what happened.

According to a poll conducted by NPR, enthusiasm among Democratic women has subsided. The results show that 83 percent of Republican women find it “very important” to vote in the November elections — a staggering 14-point increased from July.

Only 79 percent of Democratic women find it “very important” to vote in the midterms.

As noted by The New York Post, “The Kavanaugh hearings have once again exposed the left’s expectation that women all have the same opinions on a given event.”

Not all women are equal — the media should have learned that during the 2016 presidential election. Liberal networks thought women voters would not support President Donald Trump… and they were all proved wrong.

Many conservative women are angry over how Kavanaugh was treated during the hearings, and experts say their anger could make a difference in whether or not the GOP keeps control of the House and Senate.

According to The Post, women called “Mama Bears” are likely to turnout and vote in November in fear that their sons could also fall victims to uncorroborated allegations just like Kavanaugh.

“I fear for my sons,” said Gayle Chasen of Staten Island. “I believe in women’s rights, but I also believe in the deviousness of girls. Anybody can come up with something from the past and just make up any kind of story.”

Speaking on Fox News, Senate Majority Leader Mitch McConnell said Saturday, “Nothing turns Republicans of all stripes — whether they’re Bush Republicans or Trump Republicans — on like a court fight.”

McConnell added, liberals “played right into our hands, in retrospect.” He joked, “Maybe I ought to say thank you.”

Conservative women may not be yelling in the streets, or holding a march in protest, but this new poll suggests that they are ready to make their voices heard.

And unlike what the media reports, women will be filling up the voting booths… but it won’t be to vote for Democrats.

The midterm elections are less than a month away, and it looks like Democrats — and the media — could be in for another rude awakening.