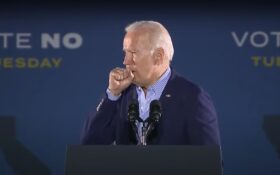 President Joe Biden was exposed to a staffer at the White House this weekend that later tested positive for the deadly coronavirus and has started showing symptoms of COVID-19 infection.

Press secretary Jen Psaki said in a statement Monday night that the staff member tested positive earlier in the day. Psaki says the staff member spent time around the president on Air Force One on Friday during a trip from Orange, South Carolina, to Philadelphia.

Psaki said the staff member is fully vaccinated and boosted and had tested negative before boarding Air Force One. She said the staffer began experiencing symptoms Sunday night.

Psaki says the 79-year-old Biden is tested regularly for the virus and has had two negative tests since Sunday. She says he will be tested again Wednesday.

“The president has a full schedule today and is not in need of quarantine,” Psaki told reporters on Monday. “We will provide information to all of you as outlined with our commitment from just a few months ago about being transparent about close contacts. I don’t have any updates for you at this point in time, but again, we expect there to be breakthrough cases across the country, right? And certainly in the federal government.

“And the most important thing to note for you and for others is that 99% or more at this point of the White House staff is vaccinated,” she said.

“Boosters are strongly recommended and distributed. We have a very thorough process here that people abide by, who are going to have close contact with the president and even beyond that, and those protocols go above and beyond CDC guidelines.”

“Again, I point you to different agencies to give any additional information, but I would just note that we do expect there to be breakthrough cases, as there will be across government,” Psaki said.