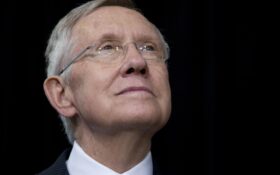 Democrats in Nevada hold both U.S. Senate seats, the governor’s mansion and three of its four U.S. House seats. The state hasn’t backed a Republican presidential candidate since 2004.

But as this year’s midterm elections approach, the party’s grip on power is under threat. Catherine Cortez Masto is considered the most vulnerable Democrat in the Senate. Gov. Steve Sisolak is facing a spirited reelection challenge from Republican Joe Lombardo. And the GOP could pick up two House seats in Nevada, which would put the party well on its way to regaining the majority in Washington.

The dynamics pose a severe test for the sophisticated organization that the late Sen. Harry Reid spent years building to give Democrats an edge in the swing state.

The party is facing headwinds everywhere, dragged down by President Joe Biden’s unpopularity and persistent inflation. And the challenges in Nevada are particularly notable because the election is the first since Reid died last year, raising questions about the durability of the so-called Reid Machine.

Some leading Democrats say the competitive environment is simply a reminder that Nevada is a genuine swing state that the national party can’t take for granted.

“I think what we’re seeing in Nevada is what we always see. We’re a purple state,” said the state’s Democratic Attorney General Aaron Ford. “We have to work hard.”

Reid, who was the Senate majority leader from 2007 to 2015, helped pool resources to maximize support for candidates up and down the ballot. His approach tapped into networks that extended well beyond the traditional party structure. He leaned especially on the heavily immigrant Culinary Union, which represents about 60,000 casino works and leads efforts to register voters, make phone calls and knock on doors.

That’s especially important in a state where shift work in the casinos, hotels and restaurants of Las Vegas and language barriers can make some voters harder to reach.

“It was everything. It was an investment in people and operatives and candidates to make sure that we were firing on all cylinders across the ballot,” said Rebecca Lambe, a longtime Reid aide and Democratic strategist.

“Across the ballot” has been a key organizing principle.

“We had every organizer we could knocking for every Democrat,” said Molly Forgey, a former Reid aide and state party staffer. Forgey is now a spokeswoman for Sisolak’s campaign.

Reid also muscled Nevada’s presidential caucuses to be among the earliest contests in the nation, sending White House hopefuls, political spending and attention to what had been an overlooked state — which amplified the resources and network of experienced campaign workers that could help in other Nevada elections.

But this November, veterans of the Reid Machine admit they’re facing a tough challenge.

“There’s no question that every Democrat in Nevada misses Sen. Reid this year,” Lambe said. But at the same time the political and organizing infrastructure that he supported and invested in “was always built to support Democrats in the long term,” he said.

“It was never just about Sen. Reid and his campaign.”

However, the coordinated operation began to fracture last year after progressives backed by Democratic Socialists of America took over the state party leadership. Top Democratic officials, including the moderates Cortez Masto and Sisolak, set up an alternative operation run through the county that includes Reno, though Nevada Democrats say the divide has not played a role in the tight races this year.

Democrats and their aligned groups working on the ground have long warned the state has the potential to swing to Republicans and at times have felt victims of their own success. In 2018 and 2020, they warned national Democrats and donors in the final weeks before the elections that they shouldn’t take the state for granted.

“It’s up in the air,” Ted Pappageorge, head of the casino workers’ Culinary Union, said of this year’s election. “It’s a complete tossup.”

The Reid Machine’s record has hardly been perfect. In some years, it has seen losses or has had to scrap out wins.

In 2014, as Reid focused on trying to win competitive Senate contests elsewhere and keep Democratic control in the Senate, efforts in his backyard dwindled. Republicans tapped into backlash against then-President Barack Obama, winning all the statewide races that year and a Las Vegas-area House seat in the heart of Democrat-friendly territory.

Reid himself faced a tight reelection battle in 2010 against Tea Party star but gaffe-prone candidate Sharron Angle. That contest, even more than this year’s, came amid widespread economic concerns as Nevada bore the brunt of a recession, but Reid and his machine managed to win.

This year, national Democrats are well aware of the stakes, fretting that Nevada is their biggest risk of losing a key Senate race. The contest is one of the most expensive in the country, with candidates and outside groups having spent about $100 million so far, despite the state’s relatively small population of about 3 million people.

That population is heavily working class and transitory, making it a constant challenge to connect with people moving in, to register them to vote and to introduce them to candidates. Roughly a third of the electorate is not registered with any political party.

It can be especially difficult to get voters who may not have deep roots in the state to pay attention to midterm elections, said Susie Martinez, a state assemblywoman and the head of the Nevada AFL-CIO.

“This is not a presidential,” she said. “People tend to be a little more lackadaisical about voting. It’s not in their mind at present.”

Pappageorge, who leads the Culinary Union as secretary-treasurer, said the union has 300 people and growing who are working full time to knock on doors __ “workers talking to workers” on behalf of Cortez Masto, Sisolak and other Democratic candidates in English, Spanish and other languages.

“This is going to be a tough election, tougher than 2020, because it’s a midterm. But we’ve got a plan to win,” Pappageorge said, even with Reid gone. “We’ll never be able to repay the senator for what he did for our state and for us that live here. But we’ve taken this fight.”