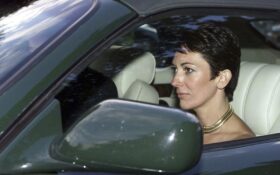 Clinton has denied visiting the island… or that he was even close friends with Epstein.

And, of course, dead men tell no tales. When Epstein died in a controversial jailhouse suicide last year, it seemed like we’d never have the opportunity to get to the bottom of the Epstein-Clinton relationship.

But that may all be changing.

Epstein confidante and sidekick Ghislaine Maxwell was arrested by the FBI in New Hampshire late last week. Maxwell has been accused of grooming young girls for sex with Epstein and his associates, and of participating in the sexual abuse herself.

A Manhattan federal court handed down a six-count indictment and Maxwell faces up to 35 years in prison.

Now, new questions are swirling about what Maxwell may know, and whether she could spill the beans.

If she’s facing the rest of her life in prison, Maxwell may have little to lose. And that could make some powerful people very nervous.

That’s also where Bill Clinton could come into the picture. Maxwell would certainly be in a position to know the details about Clinton’s relationship with Epstein.

A book released earlier this year, A Convenient Death: The Mysterious Demise of Jeffrey Epstein, by journalists Alana Goodman and Daniel Halper claimed that Clinton was having an affair with Maxwell.

“That’s why he was around Epstein—to be with her,” said a source who claimed to have witnessed the relationship.

The New York Post wrote a detailed analysis of the allegations in late May.

Being linked to a woman like Maxwell, accused of such serious and horrible crimes, would be permanently disastrous for Clinton.

To be fair, a Clinton spokesperson called the reports of an affair a “total lie.”And there has been so much speculation about Epstein’s connections to powerful people that it’s impossible to tell what’s true and what’s not.

But if Maxwell starts talking, all of that could change. And there’s been some speculation that Maxwell could talk to try to “save herself.”

Although it’s unclear if that’s even possible. If Maxwell is found guilty of the charges against her, she deserves to spend her life in jail — our justice system owes that to the victims.