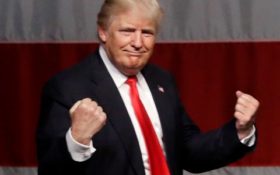 A shocking new report has revealed there’s a plot against President Donald Trump brewing within the halls of Congress — and insiders say establishment Republican lawmakers are quietly working with Democrats on a Trump impeachment.

That’s according to The New Yorker, which reported that Trump’s support among so-called “conservative” Congressmen and women is waning — fast.

Trump supporters knew he’d have enemies in Washington, D.C., but even his own political party is turning against him?

The news is alarming.

“My guess is that there’s only between fifty and a hundred Republican members of the House that are truly enthusiastic about Donald Trump as President,” Jerry Taylor, the president of libertarian think tank The Niskanen Center, told the magazine.

The rest of the Republican lawmakers are becoming increasingly receptive to talks with Democrats on getting Trump out of the White House before 2020.

“Senator Mark Warner, of Virginia, the ranking Democrat on the Intelligence Committee, privately told friends that he puts the odds at two-to-one against Trump completing a full term,” The New Yorker reported.

How deep does the conspiracy run?

Deep enough to have former House Speaker Newt Gingrich concerned – and he’s advising all Trump advisors to stay away from testifying in the Russian investigation.

Gingrich fears their words will be turned against them in the upcoming fight with liberals for the White House.

“Anybody who goes in front of a congressional hearing for something that is being investigated by the FBI is in immediate danger of perjury in the most innocent way, and I think that’s really dangerous,” Gingrich warned.

The Trump impeachment plan revolves around Section 4 of the Twenty-fifth Amendment, where a president can be removed from office if he is ruled “unable to discharge the powers and duties of his office,” as ruled either by the Vice President and a majority of the Cabinet secretaries… or by a Congressionally-appointed body, such as a panel of liberal psychologists.

In other words, Democrats would have doctors that Trump has never met rule him mentally-ill — and will use that to legally oust him.

If the President objects to their findings, Congress would be given three weeks to decide the issue. A two-thirds majority in both chambers is then required to remove the President, and there is no appeal process.

That means the anti-Trump establishment would have to muster serious support on both sides of the aisle – and there’s already credible rumors that the D.C. powers-that-be, unhappy with Trump’s efforts to “drain the swamp,” have begun quietly gathering the support they need.

Harvard professor Laurence Tribe, an expert on constitutional law, told The New Yorker, “I believe that invoking Section 4 of the Twenty-fifth Amendment is no fantasy but an entirely plausible tool — not immediately, but well before 2020.”

The first step in the plan, according to the report, is for Democrats to gain control of the House of Representatives in 2018.

Once in control, liberal lawmakers can start applying pressure on Republican establishment colleagues to abandon the president.

“If the gavels change hands, it’s a different world. No. 1, all of his public records, they will go through those with a fine-tooth comb — income taxes, business dealings,” Former Virginia Rep. Tom Davis warned. “At that point, it’s not just talk — they subpoena it. It gets ugly real fast.”

But would the establishment Republicans really turn against Trump?

Outspoken Trump critic Bill Kristol, a connected conservative insider in Washington, D.C., weighed in on his thoughts on the chances the president is eventually impeached by his own party.

“It’s somewhere in the big middle ground between a one percent chance and fifty,” Kristol said. “It’s some percent. It’s not nothing.”

Do you support President Donald Trump, or the D.C. establishment?