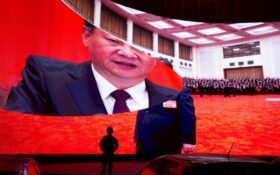 China’s economic growth picked up in the latest quarter but still was among the weakest in decades as the ruling Communist Party tries to reverse a slump while enforcing anti-virus controls and a crackdown on debt in its vast real estate industry.

The world’s second-largest economy grew by 3.9% over a year earlier in the three months ending in September, up from the previous quarter’s 0.4%, official data showed Monday.

The announcement was planned for last week but postponed while the ruling Communist Party met to award President Xi Jinping a new term as leader.

Xi, the most powerful leader in decades, wants a bigger party role in business and technology development. That has prompted warnings tighter control of entrepreneurs who generate jobs and wealth will depress growth that already was in long-term decline.

The party gave Xi a free hand by installing a seven-member ruling Standing Committee made up of his allies. Supporters of free enterprise including Premier Li Keqiang, the party’s No. 2 until last week, were dropped from the leadership.

The country’s market benchmark, the Shanghai Composite Index, lost more than 2%. The Hang Seng index in Hong Kong plunged by an unusually wide daily margin of 6.4%. Tokyo and other Asian markets gained.

The International Monetary Fund and private sector forecasters say the economy will expand by as little as 3% this year. That would be the second weakest since the 1980s after 2020, when growth plunged to 2.4% at the start of the coronavirus pandemic.

Investors and the public watched the congress for initiatives to stimulate the economy or reduce the impact of “Zero COVID” controls that shut down cities and disrupt business, but none were announced.

The latest slide in growth that began in mid-2021 hurts China’s trading partners by depressing demand for imported oil, food and consumer goods.

The improvement is “mainly a result of more flexible” anti-virus controls that isolate individual buildings or neighborhoods instead of cities, said Iris Pang of ING in a report. But she said more lockdowns are “still a big uncertainty.”

“This uncertainty means the effectiveness of pro-growth policy would be undermined,” Pang said.

Growth slid after controls on debt that regulators worry is dangerously high caused a slump in real estate sales and construction, one of China’s biggest economic engines. Economic growth fell to 4% over a year earlier in the final quarter.

Beijing has eased mortgage lending and local governments have taken over some unfinished projects to make sure buyers get apartments. But regulators are sticking to debt limits have forced small developers into bankruptcy and caused some bigger competitors to miss payments to bondholders.

The ruling party is enforcing “Zero COVID” despite rising costs and public frustration after Shanghai and other industrial centers were temporarily shut down. That has boiled over into protests in some areas at a time when other countries are easing anti-virus controls.

For the first nine months of 2022, growth was 3% over a year earlier, up from 2.5% in the first six months but barely half the ruling party’s official 5.5% target. Leaders have stopped talking about that goal but promised easier lending and other measures to boost growth.

Growth is “highly uneven” and supported by government spending on building roads and other public works while consumer spending is weakening, said Larry Hu and Yuxiao Zhang of Macquarie in a report.

In September, retail sales growth fell to 2.5% over a year earlier from the previous month’s 5.4%. Growth in factory output accelerated to 6.3% from 4.2%.

Also Monday, trade data showed export growth declined to 5.7% compared with a year earlier in September from the previous month’s 7%. Imports crept up 0.3%.

“Most of the economy lost momentum last month,” said Julian Evans-Pritchard of Capital Economics in a report. “The situation looks to have worsened in October.”

Repeated shutdowns and uncertainty about business conditions have devastated entrepreneurs. Small retailers and restaurants have closed. Others say they are struggling to stay afloat.

Beijing is using cautious, targeted stimulus instead of across-the-board spending, a strategy that will take longer to show results, economists say. Chinese leaders worry too much spending might push up politically sensitive housing costs or corporate debt.