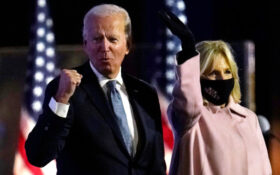 The age of President Joe Biden and First Lady Jill Biden were intensely scrutinized during the 2020 presidential election.

Critics openly wondered if they could handle the physical rigors of the White House for a four-year term.

On Wednesday, a report surfaced that Biden was admitted to the hospital Wednesday.

But the admission wasn’t for the president himself.

The White House said President Joe Biden accompanied his wife, Jill Biden, early Wednesday morning to the hospital. They were tight-lipped about the nature of the trip, saying only that she will undergo a “common medical procedure.”

Later Wednesday, the president is set to address the nation on his plans to withdraw U.S. troops from Afghanistan by September 11, 2021 — yet another delay in the troop withdrawal.

He is then scheduled to visit Section 60 of Arlington National Cemetery, the final resting place of many American service members who lost their lives in Afghanistan and Iraq.

The White House did not immediately detail the nature of the first lady’s procedure.