Report: 50% of Detroit’s mayoral candidates are felons - The Horn News 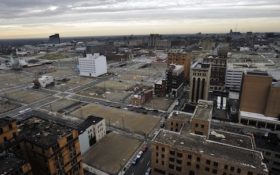 Detroit has been under control of the Democratic Party since 1962 — and it has suffered a tragic decline ever since.

Conservatives complain that corruption has gotten so bad in Detroit, criminal politicians are more common than not.

Look no further than the current mayoral race as proof.

According to a stunning new report, half of the eight current Democratic primary candidates for mayor are convicted felons. Their crimes involved drugs, illegal guns, and assaults with intent to murder.

“Three were charged with gun crimes and two for assault with intent to commit murder. Some of the offenses date back decades, the earliest to 1977. The most recent was in 2008,” The Detroit News report stated.

The primary election is the first since Detroit filed for bankruptcy in 2014. The field will be narrowed by popular vote this Tuesday, and the top two candidates will face-off at the ballot box this fall.

Mayoral candidate Curtis Christopher Greene, 32, was convicted at the age of 19 over fourth-degree fleeing and eluding police during an attempted traffic stop. Authorities say Greene was delivering and manufacturing marijuana.

Greene violated probation in July 2005 when he was arrested and charged with writing a fraudulent check, a felony to which he pleaded guilty. Greene acknowledges the previous convictions have hindered him, but claims he’s since turned his life around and has multiple degrees from University of Phoenix.

“I came from a crime-ridden area. My life, I believe it was very complex growing up,” Greene said.

Rival candidate Danetta L. Simpson, 46, has a 1996 felony conviction for assault with intent to murder. Simmons pleaded no contest to the charges on the day of the trial in 1998, in exchange for prosecutors dropping other firearm charges.

“The incident stemmed from a complaint made by a woman who’d been living with the father of two of Simpson’s children. The woman alleged she’d received threatening phone calls from Simpson and court records say a confrontation later ensued in which Simpson fired a gun. No one was injured,” The Detroit News reported.

“I was a wrongfully convicted felon, overcharged for a crime I did not commit,” said Simpson, who claimed that the witness in the case “lied on me.”

Candidate Articia Bomer, 45, was charged in 2008 with carrying a concealed weapon. Bomer claimed her conviction was “frivolous” and “wrong” and doesn’t believe “that should hinder me.”

Bomer was arrested after her car was searched by police in July 2008; authorities found an illegal .38-caliber handgun.

Bomer claims she had just purchased the vehicle and the gun wasn’t hers. “I want voters to know that they should never judge a book by its cover. I am a law-abiding citizen,” she said.

Finally, Donna Marie Pitts, 58, has a series of felon convictions dating back to 1977, where she received probation for stealing a car.

In 1987, court records show Pitts engaged in a shootout with a repair shop owner over a disputed bill. She has since been arrested and convicted on multiple different counts, including a 2003 arrest over the illegal possession of a .38 caliber handgun.

“Pitts contends she’s been wronged by the courts and police, and she disputes many of the allegations in each criminal case, saying she was discriminated against,” The Detroit News said.

“If elected, she said she will combat ‘discrimination and racism’ and advocate for an overhaul of the justice system.”

Perhaps it’s Democrats that need an overhaul of their system, instead?