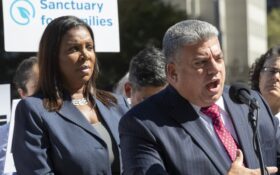 According to a New York Post report, a purported mobster handed out campaign cash donations to two top Democrats in New York City.

NYPost has claimed to learn that Brooklyn, New York District Attorney Eric Gonzalez (in 2017) and head of the Brooklyn Democratic Party Rodneyse Bichotte (in 2020) were both paid roughly $2,000 by “reputed mobster” John Rosatti.

According to the report, “reputed mobster” John Rosatti doled out the payments by way of his Plaza Auto Mall car dealership.

And although the millionaire seems to be living a life of fortune, according to the report he comes from a seedier background.

Rosatti was said to be a player in the infamous Colombo crime family, labeled by the New Jersey Division of Gaming Enforcement as a “soldier.” The report claims that he was involved in a battle with the New Jersey gaming body’s efforts to bar him from the state’s casinos.

He became sworn in as a made member of the Colombo family in 1994, New York Post reporting claims.

Nowadays however, Rosatti is known for owning “superyachts” and for founding the BurgerFi chain which is popular in New York City.

The lawyer for his auto dealership in Brooklyn, David Grandeau, says that Rosatti denies being a part of the Colombo crime family.

“He made a political donation because he has business interests in Brooklyn,” he said, “specifically Plaza Auto Mall, and he has donated to candidates of both the Republican and Democratic Parties, in and outside of Brooklyn.”

According to the report, he paid an additional $10,000 to the Democratic Party in February 2020.

“Mr. Rosatti states that he is not now nor has he ever been a soldier of the Colombo crime family.”

Meanwhile, Brooklyn’s district attorney Gonzalez is denying any and all personal ties of Rosatti.

“DA Gonzalez does not know Mr. Rosatti and has never received a personal contribution from him,” the campaign said. “However, four years ago there was a contribution from a car dealership affiliated with him.”