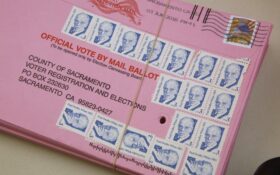 More than 100,000 mail-in ballots were rejected by California election officials during the March presidential primary, according to data obtained by The Associated Press that highlights a glaring gap in the state’s effort to ensure every vote is counted.

With the coronavirus pandemic raging, California is part of a growing number of states increasing mail-in balloting to avoid crowds at polling places. President Donald Trump is among those questioning the integrity of vote-by-mail elections while supporters say they are just as reliable as polling places and offer greater flexibility for voters.

It’s no wonder Trump is concerned.

According to Axios, only 80,000 votes swung the election in Trump’s favor — we can only imagine what might happen if 100,000 votes are rejected from the general election November.

Two years ago, the national average of rejected mail ballots in the general election was about 1.4% and in the 2016 presidential election year it was 1%, according to a U.S. Election Assistance Commission study.

The most common problem, by far, in California was missing the deadline for the ballot to be mailed and arrive. To count in the election, ballots must be postmarked on or before Election Day and received within three days afterward. Statewide, 70,330 ballots missed those marks.

Another 27,525 either didn’t have a signature, or the signature didn’t match the one on record for the voter.

“The only thing worse than people not voting is people attempting to vote and having their ballot uncounted,” she said. The tally of nullified votes “can make a difference in a close contest.”

The data didn’t break down the uncounted ballots by party registration. While the overall number was large in March, if it’s the same in November it’s unlikely to affect the presidential race — Trump lost to Democrat Hillary Clinton in 2016 by 4.3 million votes.

But there are expected to be at least several tightly contested U.S. House races where a relatively few votes could tip the balance. In 2018, Democrat TJ Cox upset Republican David Valadao by less than 1,000 votes in a Central Valley district. They have a rematch in November.

Local races sometimes are decided by a handful of votes.

California traditionally has offered mail-in voting only to those who request ballots. Over time the number has grown to represent more than half of all cast ballots. In response to the coronavirus outbreak, Democratic Gov. Gavin Newsom in June signed a law requiring county election officials to mail a ballot to all the state’s nearly 21 million registered voters for the November election.

He called mail-in voting safe and secure, pointing to a series of studies that found no evidence of significant fraud. States across the political spectrum rely solely on mail ballots, including Colorado, Utah and Washington.

In preparation for November, the state is launching a ballot-tracking tool that will quickly alert voters if they need to take action, such as adding a missing signature. Another change: The state is extending the window for mail ballots to arrive to 17 days after Election Day.

Even though he voted by mail this year, Trump has called mail-in voting “a terrible thing” prone to abuse, warning without evidence that “you get thousands and thousands of people sitting in somebody’s living room, signing ballots all over the place.”

With the COVID-19 pandemic prompting many states to pursue near-universal mail voting to minimize health risks that come with indoor crowds, national Republicans and Democrats have argued over the safety and security of votes traveling through the U.S. Postal Service.

Washington’s Republican Secretary of State, Kim Wyman, is among those who see it as a safe system. So does Alex Padilla, California’s Democratic secretary of state, who says there is “no safer … way to exercise your right to vote than from the safety and convenience of your own home.”

Last March, the highest rejection rate in California was in San Francisco, where 9,407 ballots, or nearly 5% of the total, were set aside, mostly because they did not arrive on time. By contrast, in rural Plumas County northeast of Sacramento, all of the 8,207 mail-in ballots received were accepted.

In Los Angeles County, nearly 2,800 ballots were nullified because the voter forgot to sign it, then couldn’t be found to fix the error. Statewide, that careless mistake spiked nearly 13,000 ballots.

More than 1,000 ballots were disqualified in Fresno County because the signature didn’t match the one on file with election officials. The same problem nixed over 1,300 ballots in San Diego County — and over 14,000 statewide. In some of those cases, voting experts say, a family member might have signed for others in the household, which is illegal.

Some voters apparently filled out their ballots then left them on the kitchen table: In more than 800 instances, envelopes were returned to election officials without the marked ballot inside.

Orange County Registrar of Voters Neal Kelley said ultimately a voter has the responsibility to fill out the ballot correctly and get it in the mail on time. Sometimes, “it’s just a product of voters forgetting,” Kelley said.