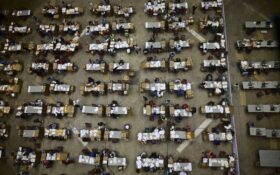 Puerto Rico’s elections commission said Tuesday that it has discovered more than 100 briefcases containing uncounted ballots a week after the U.S. territory held its general election, drawing criticism and scorn from voters who now question the validity of the outcomes of certain races.

Francisco Rosado, the commission’s new president, said the briefcases were found in a secured vault and blamed the situation on what he said was an underfunded and understaffed administrative board responsible for counting a record number of absentee and early votes.

“We’ve identified, much to our regret, a disorganization in the handling of material in the vaults,” he said at a press conference. “Misplaced. Poorly organized. We have to admit that.”

Rosado said he didn’t know yet how many total votes are in the 126 briefcases, noting some contained three ballots and others 500 ballots. Officials initially said there were 182 briefcases but later revised the number.

“Every vote will be counted,” he said. “I have to tell the people of Puerto Rico to trust the transparency of the process.”

The discovery is the latest misstep for a commission that botched the island’s primaries in August so badly that a second round of voting was held, an unprecedented situation that led to the commission’s previous president to resign a month later. Then the commission was criticized for taking a record four days after the Nov. 3 general election to finalize counting nearly all votes, only to announce on Tuesday that it had discovered more briefcases. Traditionally, the commission releases final vote counts the night of the election.

Roberto Iván Aponte, electoral commissioner for Puerto Rico’s Independence Party, said in a phone interview that he expects all votes inside the newly discovered suitcases to be counted by Thursday at the latest. He said those votes could affect races like the one for mayor of Culebra, a popular tourist island just east of Puerto Rico. The mayor elect won only by two votes, according to preliminary results.

Aponte and other officials blame the ongoing problems on a new law that Gov. Wanda Vázquez approved in June just two months before the primary that led to several changes including the softening of restrictions for absentee and early voting and eliminating departments and high-ranking positions within the elections commission, which led to the departure of longtime officials. This year, Puerto Rico received more than 220,000 absentee and early votes, a record for officials who have been overwhelmed by the paperwork.

Aponte warned that the commission’s ongoing problems is sowing doubt among voters.

“After these elections, there has to be a serious evaluation of how those votes will be handled,” he said, referring to absentee and early votes.