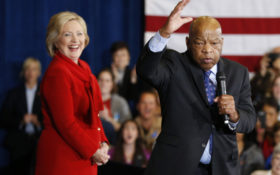 Georgia Rep. John Lewis claims he’s never missed an inauguration during his three decades of public service, so — according to Lewis — that makes his absence Friday in Washington, D.C. for President-elect Donald Trump’s swearing-in ceremony extraordinary.

Only one problem: He’s been lying the whole time.

Lewis has skipped inaugurations in the past. In fact, he’s even declared Republican presidents illegitimate before, too.

The hypocrisy was discovered by savvy Trump supporters, and the following picture quickly circulated on social media Monday —

But that hasn’t stopped Lewis.

And even worse, his stunt has been embraced by over 40 of his fellow House Democrats, according to The Washington Post.

It’s a shameful act of political theater on a day designed to be nonpartisan and uniting for America.

Instead, Democrats are using the day to shine a light on themselves — and claiming the Republican president-elect is a threat to democracy.

The number who initially said they would skip the event has increased after Lewis lashed out at Trump over the weekend and challenged his legitimacy as the next president.

Trump and other Republicans have dismissed the boycott and complaints, saying Democrats are sore losers who need to accept the results of the election and move on.