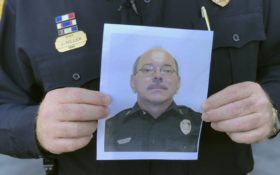 Less than 24 hours after police say a Mississippi man gunned down a uniformed officer in police station parking lot, the now-arrested suspect was marched on Monday night back into the same Biloxi police station.

Biloxi Police Chief John Miller said one of his department’s officers was driving home through Wiggins, 40 miles (65 kilometers) north of the Gulf Coast city when the officer spotted a man at the side of the road who looked like the target of an intense manhunt.

That officer’s suspicions were on the money. He called Wiggins police who in turn arrested 19-year-old Darian Tawan Atkinson, wanted for capital murder in the slaying of Biloxi Patrolman Robert McKeithen.

Atkinson, tall and lanky in a blue and black baseball jersey, gave something close to a grin as officers yanked him from the back of a police cruiser and paraded him past watching reporters and cheering police officers back in Biloxi, only feet away from where McKeithen was gunned down after 10 p.m. Sunday night. The 23-year-veteran of the Biloxi force had been planning to retire this year.

“It’s been a long couple of days,” said Miller, who told reporters he was going to bed as he got news of the capture. “We feel vindicated. He’s been treated properly and fairly. And now we will grieve for the family.”

Miller wouldn’t say if Atkinson had told police anything. He said Atkinson would be questioned and then transported to the Harrison County jail in Gulfport. It’s unclear when Atkinson will go before a judge or if he has a lawyer.

“Next we want to make sure that we have a solid case,” Miller said. “We want the district attorney to be pleased with the case we present, and we want this guy to pay for what he’s done.”

It’s unclear how Atkinson got to Wiggins after a day when police searched locations in Biloxi, sometimes carrying assault rifles, looking for the man. Miller said he expected at least one person would be charged as an accessory for illegally aiding Atkinson.

It remains unclear whether McKeithen was targeted or shot at random

“I can say that’s probably the saddest thing about this case is we have no motive, we have no reason for him to do this to anybody,” Harrison County Sheriff Troy Peterson said at a news conference earlier Monday evening.

Authorities say the gunman approached McKeithen in the station’s parking lot Sunday night after coming inside the station, shooting the officer multiple times. Images from a surveillance camera inside the station showed a suspect wearing navy blue shorts, a black T-shirt, a red beanie cap and dark high-top sneakers.

Miller said earlier Monday that the suspect, then still unidentified, “seemed a bit nonchalant” as he walked around. Miller turned the investigation over to the neighboring Gulfport Police Department, saying it was better to have an outside agency investigate the death of one of Biloxi’s own officers.

Asked if Atkinson had a criminal record, Gulfport Police Chief Leonard Papania said “there’s nothing that would indicate this,” later describing the shooting as “a sick and deliberate act.”

Authorities withheld details of the shooting itself, but Miller has said that “with all of Robert’s training, I don’t know that there was anything else he could have done.” Immediately after the shooting, McKeithen was rushed to a hospital where he was pronounced dead.

McKeithen’s relatives said Monday through Biloxi city spokesman Vincent Creel that they weren’t prepared to talk. A memorial service is planned Tuesday night at Biloxi police headquarters. The officer’s funeral and burial are planned for May 13.

“This was a senseless murder of a veteran police officer,” Gov. Phil Bryant later wrote on Twitter. “We will find the coward who fired the shots and take him into custody.”

At a news conference on Monday morning outside Biloxi’s police headquarters, Miller gestured at one point toward the crime scene around McKeithen’s patrol SUV. He said his officer was “murdered last night right here in our parking lot.” Mourners piled floral tributes on the SUV later in the day.

McKeithen was described as an Air Force veteran with a wife, daughter, two stepsons and a stepdaughter.

Miller said he and McKeithen had handled calls together earlier in their career. Department records show McKeithen and three other officers were awarded a medal of valor for risking their lives to rescue four special needs children during Hurricane Katrina in 2005.

Said Miller of the slain officer, “He treated people with respect and dignity and we’re going to miss him sorely.”