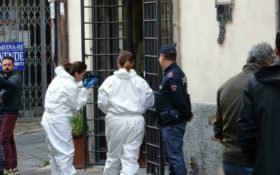 Italian police have arrested a 22-year-old American and accused him of killing a 74-year-old Italian owner of a clothing store in Viterbo, a city near Rome.

Police arrested Michael Aaron Pang on Saturday and allege the killed the Italian storekeeper by striking him with a stool. The body of Norveo Fedeli was found inside his store Friday, Lt. Col. Guglielmo Trombetta said.

Trombetta said Pang, who was born in South Korea, is a graphic designer from the Kansas City area who arrived in Italy about two months ago. Trombetta said it was unclear why Pang was in Italy. He said the suspect has not spoken yet with detectives.

Pang’s lawyer, Remigio Sicilia, said he came to Italy on a tourist’s visa and had a desire to learn Italian and work in Italy. He said Pang is from Overland Park, Kansas, a suburb of Kansas City. He said Pang appeared to have no criminal past.

Trombetta said Pang ordered designer clothes worth about 600 euros ($670) from Fedeli’s store. He said Pang had gone to the store twice before Friday to purchase the clothes, but his credit card was rejected.

Police allege Pang and Fedeli scuffled before Pang killed the storekeeper. Police say Pang changed his clothes and took the man’s wallet before fleeing the store with one of his shoes covered in a bag because it was stained in blood.

Police say they found Fedeli’s stolen wallet and other evidence linking Pang to the killing at a room he rented in Capodimonte, a lake town near Viterbo.

Pang, who faces murder and robbery charges, is expected to appear in court Monday, Trombetta said.