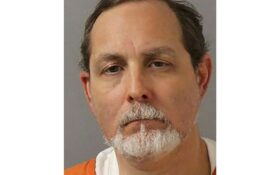 A longtime prison reform advocate accused of preparing to stage an escape at a Tennessee jail that’s under construction had a builder create a concrete room in his condominium’s basement so he could learn how to break into the walls, authorities say.

The room built in a storage area were discovered in March after investigators obtained a search warrant for Alexander Friedmann’s condo in Nashville, according to a federal complaint filed Tuesday.

The federal charge, of weapons possession by a felon, follows the discovery in March of a cache of 21 firearms at the home of a friend of Friedmann’s, U.S. Attorney Don Cochran announced.

The former convict turned crusader against private prisons was a longtime editor at Prison Legal News until his arrest in January. Authorities reviewed many hours of security video they said show him gaining access to the new jail on at least 10 occasions, sometimes accompanied by an accomplice who acted as a lookout, federal prosecutors said.

They accuse him of dressing as a construction worker, stealing keys, and covering guns and other weapons with a material after placing them inside the jail’s block walls and window areas.

“It was discovered that Mr. Friedmann, over many months, had developed and implemented an extremely deliberate and, in my opinion, evil plan,” Nashville Sheriff Daron Hall said in a news conference in February.

Hall said he believes Friedmann was designing a massive jail break that would endanger “every inmate, every visitor and our entire community.”

The Tennessean reported authorities said the basement room used materials similar to that of the new jail, and was constructed by Friedmann’s builder friend, who thought it was going to be used to store legal documents.

Friedmann also had a sketch of the jail that he tried to chew and swallow when police detained him at the Davidson County Downtown Detention Center construction site in January, authorities said.

Before his most recent charge, Friedmann was charged in January with attempted burglary and with vandalism in February. Friedmann was previously convicted of armed robbery and assault. His bond was set at $2.5 million in February.

“Mr. Friedmann is presumed innocent and will respond through the appropriate legal processes,” his attorney, Ben Raybin, said in a statement in February.

Prison Legal News is a project of the nonprofit Human Rights Defense Center. Friedmann resigned as editor after his arrest in January, executive director Paul Wright said in a telephone interview.