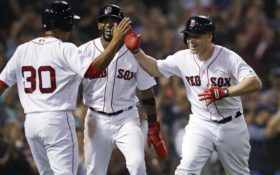 The Red Sox became the first team in the major leagues to clinch a playoff berth and did not celebrate.

“Any time you make the playoffs and give yourself a chance to be that last team, it’s a pretty special thing,” Brock Holt said. “We’re excited by that, but we’ve got more work to do.”

Holt pinch hit in the seventh inning and hit a go-ahead, three-run homer in a 7-2 win over the Toronto Blue Jays on Tuesday night that guaranteed Boston no worse than a wild card berth.

At a major league-best 99-46, the Red Sox lead the AL East by nine games with 2½ weeks left. Their postgame celebration was lining up for routine high-fives and heading back to the clubhouse.

“We’re in great position to win the division and then to accomplish other things,” first-year manager Alex Cora said. “As I told the group, I’m very proud of them.”

Starter Chris Sale came off the disabled list and pitched one scoreless inning, striking out two and throwing 26 pitches. Sale has been slowed by inflammation in his left shoulder, and the Red Sox had said they would ease their ace back into action.

Toronto led 2-0 in the seventh, when Steve Pearce hit a tying triple and Holt followed with a two-out home run off Ryan Tepera (5-5).

Kevin Pillar had an RBI single for Toronto during a two-run sixth, when Devon Travis scored the game’s first run on a double-steal and botched defensive play by the Red Sox.

Toronto starter Ryan Boruki, who allowed seven runs and eight hits July 13 at Fenway Park, held an opponent to two runs or fewer in at least six innings for the third time in four starts.

Sale continued tossing in the bullpen after he was pulled, trying to rebuild his arm strength for the postseason. He was hoping to get a second inning, but Cora said it didn’t make sense because the Red Sox weren’t going to let him throw more than 40 pitches.

“This is the first step in the right direction,” Sale said, crediting the Red Sox medical staff. “There was a lot of work by a lot of people that went into this.”

Holt also homered as a pinch hitter on Aug. 13 at Philadelphia.

“I guess I would rather be in there from the start than to come in and pinch-hit,” Holt said, “but if I keep on hitting homers then I’ll take it.”

Blue Jays: RF Randal Grichuk was back in the lineup, two days after he crashed face-first into a guard’s metal chair. Concussion tests were negative on Grichuk, who was left with a bloody nose, swollen left eye socket and a few facial cuts. … Pillar ran face-first into the center field wall chasing Pearce’s triple. Pillar needed a few minutes to get back to his feet, but stayed in the game.

Red Sox: Sale made his first start since Aug. 12 and threw 26 pitches. After a leadoff double by Lourdes Gurriel, he struck out two, then walked a batter before Grichuck popped out to end the inning.