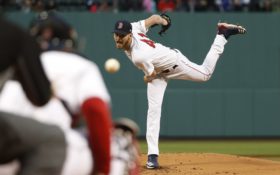 Red Sox ace Chris Sale struck out a career-high 17 in just seven innings against Colorado, then was pulled after 108 pitches on a chilly Tuesday night at Fenway Park.

Sale became the first pitcher in major league history to fan 17 in a start of no more than seven innings.

The big league record for strikeouts in nine innings is 20, done five times. Roger Clemens did it twice for Boston, Kerry Wood and Randy Johnson also accomplished the feat and Max Scherzer was the last to it in 2016.

When Boston manager Alex Cora told Sale he was coming out, the lefty used his fingers to form the number 20.

Sale surpassed his previous best of 15 strikeouts, dominating the Rockies with a firm fastball and a sharp slider. A seven-time All-Star, Sale struck out the first six batters and fanned eight through three innings. He didn’t allow a runner until Mark Reynolds doubled to begin the fifth.