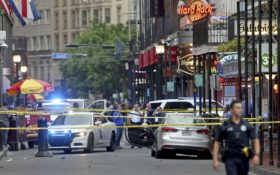 A statement released late Thursday said troopers helping close traffic lanes on Bourbon Street saw a car driving toward pedestrians around 7 p.m. Police say the driver had made an illegal turn, and failed to comply with attempts to stop the car.

The driver was shot once. New Orleans Emergency Medical Services spokesman Jonathan Fourcade says the driver was hospitalized with an abdomen wound. His exact condition is unclear, but police say he’s stable.

Officials haven’t released the identity of the driver. The trooper wasn’t injured.

According to The New Orleans Advocate , the incident marks at least the third shooting on the famed New Orleans’ street since February.