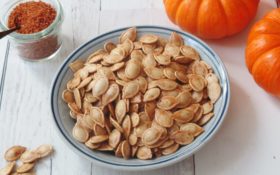 When life gives you lemons, make lemonade, right? In the same vein, I propose that when fall gives us pumpkins, we should make toasted pumpkin seeds. We have to scoop them out anyway when we cook the squash, so why not turn them into something delicious instead of tossing them into the garbage?

I’ll admit that separating the seeds from the vegetable’s stringy membrane can be messy. The seeds are sticky, the membrane in which they are embedded is sticky, and your hands will get sticky as you do the work. The solution? Pull the seeds out of the pumpkin’s cavity, put them in a large bowl of water, then swish them around. The strands of membrane are much easier to pull off in water. Remove any of the seeds’ residual stickiness by rinsing them once or twice. Now they’re good to go.

Anyone who has ever roasted winter squash seeds knows they don’t cook evenly. The skin remains kind of chewy even as the seeds’ innards become tender. Here’s how to ensure even cooking: Start by simmering the seeds in boiling salted water. This step not only tenderizes the seeds’ hard skin, it also deeply seasons it.

Once the seeds have been boiled and drained, they need to be dried. I used to do it by plopping them onto a towel and patting them dry. Predictably, and annoyingly, all the seeds then stuck to the towel. It was during the testing of this recipe that I finally figured out a way around this problem. Given that we’re going to bake the seeds anyway, why not start by drying them out first in the oven? Then add your fat of choice — oil or butter — and continue to bake them, stirring occasionally, until they’re almost crispy and golden, which takes a while. I say “almost crispy” because the baked seeds don’t achieve complete crispiness until they cool off completely.

Be sure to season the seeds while they’re still hot out of the oven, using either a tad more salt or the spice blend of your choice, such as creole seasoning. (Don’t season the seeds before putting them into the oven. The spices will burn as the seeds bake.) Those folks who decline to spice up the seeds will still have their deeply nutty flavor to enjoy.

So there you go. Eat these toasted seeds straight up, like nuts, or add them to soups or salads.

1 teaspoon Creole spice seasoning (such as Zatarains) or more to taste, for the spicy version

In a pot of boiling salted water, boil the seeds for 10 minutes. Drain well. On a rimmed sheet pan lined with aluminum foil, spread out the seeds so they don’t overlap. Bake them on the middle shelf of the oven for 5 minutes. Remove and stir well. Bake for another 4 to 5 minutes or until most of the seeds appear white.

Remove the seeds from the oven, drizzle with the oil or butter and bake for 50 minutes, stirring several times. Sprinkle the seeds with salt or Creole spice seasoning while still hot. Let cool completely (they will continue to crisp as they cool) before using. If you don’t use them right away, store them in an airtight container.