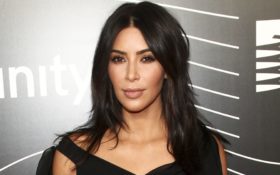 Kardashian travelled to Washington D.C. in hopes of swaying Trump to pardon Alice Johnson, a first-time offender sentenced to life in prison for a nonviolent drug conviction.

The reality mogul first heard of Johnson through social media, and has since been advocating for her freedom and paying for her legal bills.

This is so unfair… https://t.co/W3lPINbQuy

The Kardashian empire has now expanded to politics as the reality star meets with the president and his son-in-law Jared Kushner to discuss the possibility of prison reform, and to secure a pardon for 62-year-old Johnson who has been behind bars without a chance of parole since 1993.

“When I see a story like hers and I go back to maybe decisions we’ve all made that probably — maybe not at that caliber — but if you think about a decision that you’ve made in your life, and you get life without the possibility of parole for your first time, nonviolent offense, there’s just something so wrong with that,” Kardashian previously explained.

Kardashian first learned of Johnson’s story earlier this year and soon after she reached out to First Daughter Ivanka Trump in an attempt to set up a White House meeting.

Ivanka reportedly passed Kardashian along to Kushner who set up the Oval Office meeting “along with White House counsel” where the reality star will present a legal argument in Johnson’s favor.

Kardashian’s sudden engagement in politics and legal proceedings comes at no surprise as she is the daughter of late superstar lawyer Rob Kardashian.

“I would explain to [Trump] that, just like everybody else, we can make choices in our lives that we’re not proud of and that we don’t think through all the way. I really do believe that she’s going to really thrive outside of prison and I would just urge him to please pardon her,” she explained.

Following Kardashian’s meeting at the White House, she is reportedly schedule to dine with the Kushners at their D.C. home.