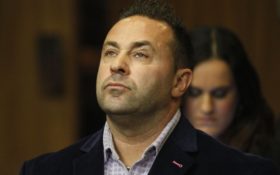 A federal court has ruled that the husband of “Real Housewives of New Jersey” cast member Teresa Giudice can stay in the U.S. as he appeals deportation to his native Italy.

The 3rd U.S. Circuit Court of Appeals in Philadelphia delayed Joe Giudice’s deportation in an order published Wednesday. The court is expected to issue a decision within a few months, after attorneys for Giudice and the government file briefs.

A message seeking comment as left Thursday with an attorney for Giudice.

The Giudices pleaded guilty in 2014 to financial fraud. Under an agreement that allowed them to serve staggered sentences to allow for the care of their four young daughters, Teresa Giudice served her sentence first and was released in December 2015.

Her husband then served his term and was released in March.

A judge had ruled in October that Joe Giudice would be deported upon completion of his sentence. Giudice has said through his attorneys that he came to the U.S. as an infant and wasn’t aware he wasn’t an American citizen.

A group of more than two dozen former immigration judges this month filed a brief with the 3rd Circuit in support of Giudice’s appeal.

Giudice has been held at an immigration detention center in Pennsylvania since his release from prison.

The couple pleaded guilty in 2014 to bankruptcy fraud and submitting false loan applications to get $5 million in mortgages and construction loans. Joe Giudice also pleaded guilty to not paying about $200,000 in income taxes.

Joe Giudice’s federal sentence ran concurrently with an 18-month state sentence for unlawful use of an ID and impersonation, stemming from his 2014 guilty plea in an unrelated case.

He was charged with using his brother’s identity to obtain a driver’s license while his own license was suspended for driving while intoxicated in 2010.