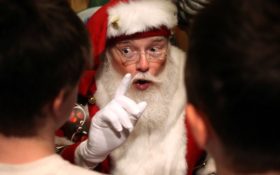 It might be early in the season, but there’s already been a politically correct attack on Christmas.

And this one didn’t come from the usual suspects on the left (although you can bet they’ll be doing their best to block holiday cheer just the same).

It came from a Catholic bishop!

Parents of students at Queen of Peace School in Belleville, Illinois, are outraged after their kids came home from school in tears.

Bishop Edward Braxton was spreading certain ugly rumors about the Man in the Red Suit.

Yes, this knucklehead allegedly told a group of children that there’s no Santa Claus!

The church claims it’s a misunderstanding and that the bishop was just trying to share the true story of St. Nicholas.

But the kids are crying, and parents are absolutely furious.

“It’s my job to tell [my son], not his,” parent Ray Schott, whose son came home in tears, told The Chicago Tribune. “These kids are exposed to so much, so early. [Santa] is the last pure thing in a child’s life. It hurts. He had no right to do any of that.”

Another parent said the word was spreading like a virus.

“They hop in the car with [younger siblings] and say ‘Bishop said there’s no Santa Claus’,” parent Boyd Ahlers, who has children in both fifth and sixth grade, told The Belleville News-Democrat. “What’s that do to the kids 5, 6, 7 years old? All the kids are talking about it … it just waterfalls.”

“Many children still believed and came home crushed,” one father wrote on Facebook. “In many cases he took the last piece of childhood memories from many kids and their parents.”

Some parents are threatening to keep their kids out of school and even from Mass if the bishop will be there.

“We’re at the point that we don’t want our child to go to Mass the day he’s scheduled to speak [at St. Teresa],” parent Jared Viviano, who portrays Santa at the city’s annual Santa Parade, told the Tribune. “If he’s going to go and tell Santa isn’t real she’s not going to school that day.

And that’s not the only holiday he allegedly attacked.

“He kind of chastised the kids for dressing up for Halloween,” Santanello told the newspaper. “He treated the whole Halloween concept as something kids shouldn’t be doing.”

The local church is in damage control mode.

Jonathan Birdsong, superintendent of the Belleville Diocese schools, called it “a complete misunderstanding.”

He said in a statement that the bishop was explaining how the “good works of St. Nicholas was gradually changed into the story of Santa Claus, a jolly elf bringing gifts down the chimney to children.”

“The letter does not represent their interpretation of what the Bishop said to them during the visit on Tuesday,” one parent wrote on Facebook. “It infuriates me that he basically told my child I lie to them.”

Others know their kids came home in tears… and they know what their kids told them.

“My concern is not just about one school,” Schott told The News-Democrat. “My concern is about the entire diocese. [Braxton] needs to learn to talk to certain levels of children; what he said is unacceptable. We are owed an apology.”